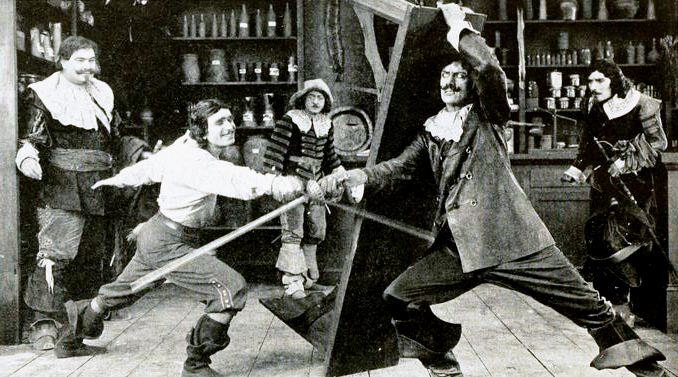 Today is Talk Like a Pirate Day! While there are many wonderful ways to celebrate Talk Like a Pirate Day, including learning how to speak Pirate through Mango Languages, our online language learning service, one intriguing aspect of fictional pirates is their dashing, debonair, swashbuckling manner. One of the most famous pirates, Captain Blood–who was created by swashbuckler master Rafael Sabatini and played in the film by the greatest swashbuckler of all, Errol Flynn–was also the quintessential swashbuckling hero. If you enjoy the swashbuckling aspect of pirates, explore some of the titles below to encounter both classic and lesser known swashbucklers. Most of them aren’t pirates, but all of them are adventurous, romantic, and utterly heroic. 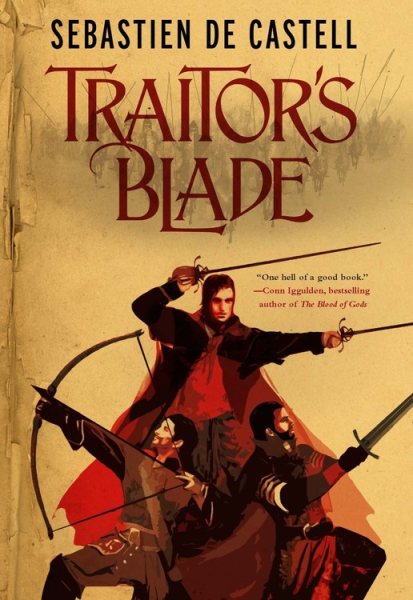 The King is dead, the Greatcoats have been disbanded, and Falcio Val Mond and his fellow magistrates Kest and Brasti have been reduced to working as bodyguards for a nobleman who refuses to pay them. Things could be worse, of course. Their employer could be lying dead on the floor while they are forced to watch the killer plant evidence framing them for the murder. Oh wait, that’s exactly what’s happening.

Now a royal conspiracy is about to unfold in the most corrupt city in the world. A carefully orchestrated series of murders that began with the overthrow of an idealistic young king will end with the death of an orphaned girl and the ruin of everything that Falcio, Kest, and Brasti have fought for. But if the trio want to foil the conspiracy, save the girl, and reunite the Greatcoats, they’ll have to do it with nothing but the tattered coats on their backs and the swords in their hands, because these days every noble is a tyrant, every knight is a thug, and the only thing you can really trust is a traitor’s blade.

The Three Musketeers by Alexandre Dumas

In this swashbuckling epic, d’Artagnan, not yet twenty, sets off for Paris in hopes of joining the Musketeers, that legion of heroes highly favored by King Louis XIII and feared by evil Cardinal Richelieu. By fighting alongside Athos, Porthos, and Aramis as they battle their enemies, d’Artagnan proves he has the heart of a Musketeer and earns himself a place in their ranks. Soon d’Artagnan and the gallant trio must use all their wits and sword skills to preserve the queen’s honor and thwart the wicked schemes of Cardinal Richelieu. With this classic tale, Dumas embroiders upon history a colorful world of swordplay, intrigue, and romance, earning The Three Musketeers its reputation as one of the most thrilling adventure novels ever written. The Princess Bride by William Goldman

Westley . . . the handsome farm boy who risks death and much, much worse for the woman he loves; Inigo . . . the Spanish swordsman who lives only to avenge his father’s death; Fezzik . . . the Turk, the gentlest giant ever to have uprooted a tree with his bare hands; Vizzini . . . the evil Sicilian, with a mind so keen he’s foiled by his own perfect logic; Prince Humperdinck . . . the eviler ruler of Guilder, who has an equally insatiable thirst for war and the beauteous Buttercup; Count Rugen . . . the evilest man of all, who thrives on the excruciating pain of others; Miracle Max. . . the King’s ex-Miracle Man, who can raise the dead (kind of); The Dread Pirate Roberts . . . supreme looter and plunderer of the high seas; and, of course, Buttercup . . . the princess bride, the most perfect, beautiful woman in the history of the world. 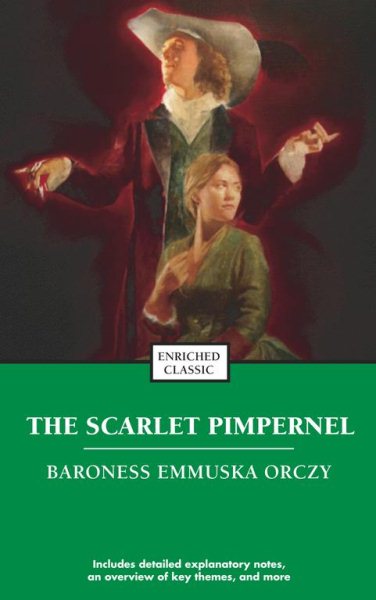 The Scarlet Pimpernel by Baroness Orczy

In the year 1792, Sir Percy and Lady Marguerite Blakeney are the darlings of British society; he is known as one of the wealthiest men in England and a dimwit; she is French, a stunning former actress, and the cleverest woman in Europe; and they both find themselves at the center of a deadly political intrigue. The Reign of Terror controls France, and every day aristocrats in Paris fall victim to Madame la Guillotine. Only one man can rescue them–the Scarlet Pimpernel–a master of disguises who leaves a calling card bearing only a signature red flower. As the fascinating connection between the Blakeneys and this mysterious hero is revealed, they are forced to choose between love and loyalty in order to avoid the French agent Chauvelin, who relentlessly hunts the Scarlet Pimpernel. 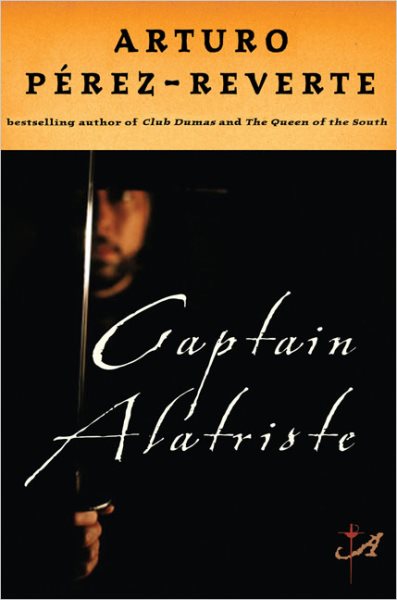 It is the height of Spain’s celebrated golden century – but beyond the walls of the Royal Palace there is little on the streets of Madrid that glitters. The Invincible Armada has been defeated. The shadow of the Inquisition looms large. And the Thirty Years’ War rages on in Flanders. When a courageous soldier of this war, Captain Diego Alatriste, is forced to retire after being wounded in battle, he returns home to live the comparatively tame – though hardly quiet – life of a swordsman-for-hire. In this dangerous city where a thrust of steel settles all matters, there is no stronger blade than Alatriste’s.

The captain is approached with an offer of work that involves giving a scare to some strangers soon to arrive in Madrid. But on the night of the attack, it becomes clear that these aren’t ordinary travelers – and that someone is out for their blood. What happens next is the first in a series of riveting twists, with implications that will reverberate throughout the courts of Europe. 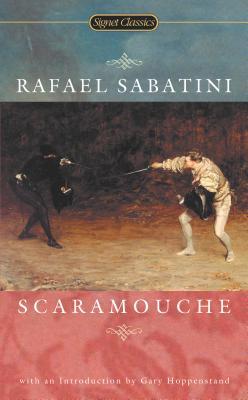 Once he was André-Louis Moreau, a lawyer raised by nobility, unconcerned with the growing discontent among France’s lower class—until his friend was mercilessly struck down by a member of the aristocracy.

Now he is Scaramouche. Speaking out against the unjust French government, he takes refuge with a nomadic band of actors and assumes the role of the clown Scaramouche—a comic figure with a very serious message…

Set during the French Revolution, this novel of swashbuckling romance is also a thought-provoking commentary on class, inequality, and the individual’s role in society—a story that has become Rafael Sabatini’s enduring legacy. Young Dick Shelton, caught in the midst of England’s War of the Roses, finds his loyalties torn between the guardian who will ultimately betray him and the leader of a secret fellowship, The Black Arrow. As Shelton is drawn deeper into this conspiracy, he must distinguish friend from foe and confront war, shipwreck, revenge, murder, and forbidden love, as England’s crown threatens to topple around him. 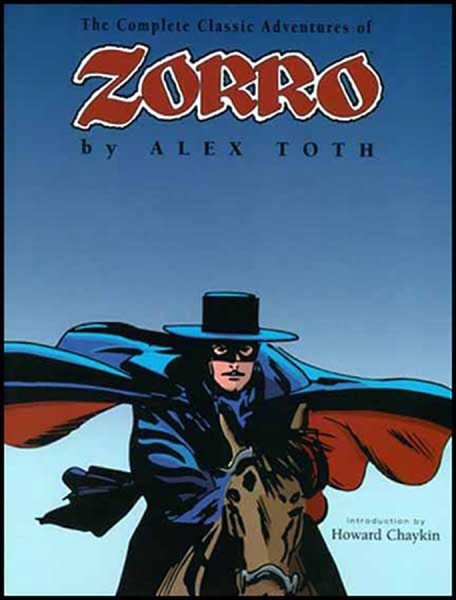 The Complete Classic Adventures of Zorro by Alex Toth

Before Batman, before all the other masked vigilantes to follow in his footsteps, the masked adventurer known as Zorro meted out justice and aided the oppressed. Set in the early days of Spanish California these four volumes recapture the swashbuckling derring-do of the first masked vigilante: Zorro. Fans of westerns, high-romance and adventure will find their palates satiated with these volumes from some of today’s greatest creators.