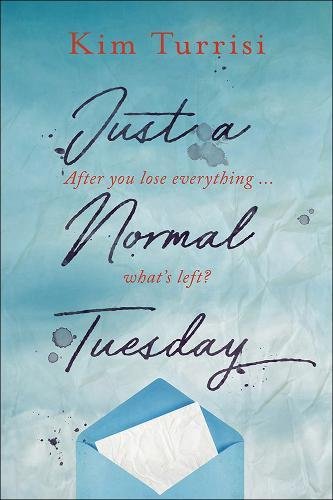 Summary: It’s just a normal Tuesday…until sixteen-year-old Kai finds a suicide note from her beloved older sister, Jen. Now Kai is the only child in a family reeling with grief. Unable to make sense of her sister’s choice, Kai begins to lose control. She cuts class. Lashes out at the people closest to her. Pops the same pills that killed her sister. As she spirals toward rock bottom, her parents offer her a lifeline: a summer away at camp. Grief camp…for teens. Kai reluctantly agrees to attend, even though she’s not exactly in the mood for s’mores. But she finds solace in meeting kids like her, and slowly she begins to come back to life—and even love—at The Treehouse. -Goodreads

Just a Normal Tuesday by Kim Turrisi is a novel about sixteen-year-old Kai’s emotional journey towards recovery. After the event of her sister’s suicide, she loses control and drowns herself in her addiction to drugs and alcohol. She faces multiple bumps and obstacles during her journey towards the new normal after the death. Her friends Emily and TJ attempt to help her recover, and her parents push her to seek help at Grief Camp, where she ends up finding love in the process.
Turrisi’s language is captivating and engaging. It pulls the reader into the story, putting them in Kai’s shoes. Her journey is heartwarming yet heartbreaking at the same time, and an emotional journey in itself. Readers should mentally prepare themselves before beginning the book, as the storyline is exceptionally relatable and might take a toll on one’s emotional conscience; however, it is a great read. 4 out of 5 stars.

Find this book in our catalog: On Call