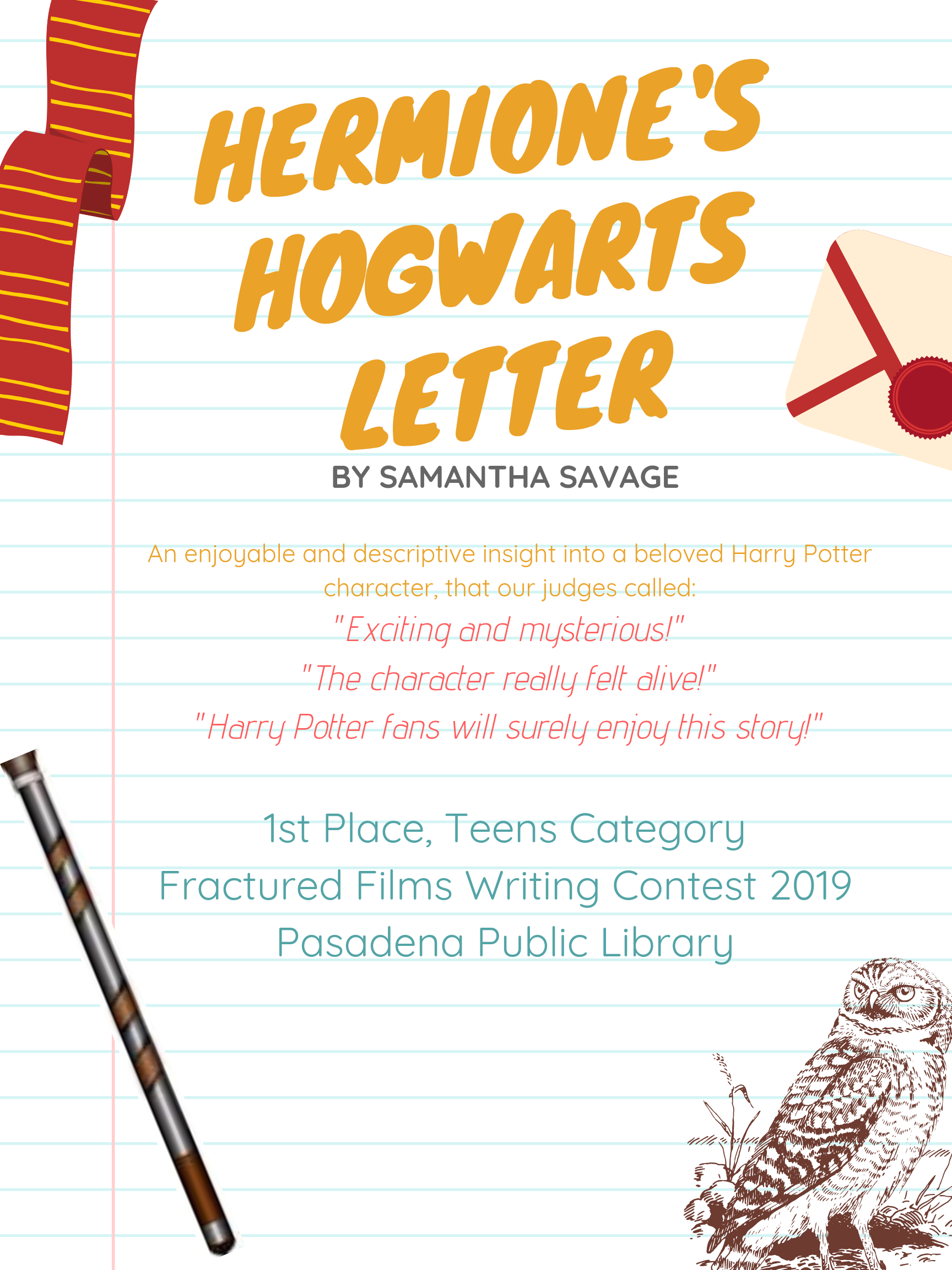 Around midnight on the night of the ninth of September 1990, Hermione Granger awoke to a crash and the hooting of an owl just outside her front door. She sat up startled as the hooting continued, disturbing the night silence. She got out of bed and brushed her bushy brown hair out of her eyes. Hermione walked to the door and opened it. Tentatively, she opened her front door and stepped outside. On the ground was a single letter addressed to:

Hermione stooped down and picked up the letter, letting her hair fall back into her face as she did so. She noticed a couple of brown feathers on the ground near the letter and could still hear the hooting of an owl nearby. Looking into the darkness, she could make out the figure of the owl just a few feet away. She walked over to it and saw that it had been badly hurt. The owl’s leg was bleeding and it could not walk.

Hermione went inside and grabbed a small rag for the owl’s leg, a large cardboard box, and a blanket. She went back outside, carefully tied the owl’s wounded leg in the rag, placed the blanket in the box, and the owl atop the blanket. The owl gave a hoot of thanks and a few more hoots of pain as it tried to make itself comfortable. Hermione stroked it sympathetically and realized that she was still holding the letter. She turned it around in her hand and found it to be sealed with sealing wax at which she smiled. The purple wax was stamped with the letter H surrounded by four animals: a badger, a snake, an eagle, and a lion. Hermione opened the envelope and took the letter out. It said:

HOGWARTS SCHOOL
of WITCHCRAFT and WIZARDRY

We are pleased to inform you that you have been accepted at Hogwarts School of Witchcraft and Wizardry. Please find enclosed a list of all necessary books and equipment.

Term begins on September 1. We await your owl no later than July 31.

Hermione read this letter over multiple times. She flipped it over, wondering if it was a joke. Hermione often got over excited, especially when it came to learning. Because of this, she was not very popular in school and was often the target of mean though usually harmless pranks. She expected this to be yet another one, but could find no trace of inauthenticity. In fact, it looked extremely real. “We await your owl,” she whispered aloud questioningly.

“Did you bring the letter?” Hermione asked it, shocked at how strange it was that she was talking to an owl or that she had just received a letter from a school of witchcraft and wizardry.

Hermione thought for a moment, still confused and amazed that this owl had managed to deliver a letter that was clearly addressed to her and even more clearly from a magical school. She was beginning to believe it, but still was not convinced. Her brain, as it often did, was working at lightning speed.

“How did the owl know where to find me?” she thought to herself. “Owls can’t read.They don’t know one street from another. They can barely tell north from south and they don’t even call them north and south. It must not be from the owl. It was just a coincidence that the owl came by at the same time and that the letter said,”We await your owl.” The letter is just a joke. The owl just happened to fly past our house and hurt its leg. But it really seemed like it understood me when I talked to it. No, it’s dark. I’m tired. I just wanted to believe it. I got too excited. As usual.”

However, Hermione could not shake the feeling that it was not a joke, that it was real, that she had really just been invited, in a letter delivered by an owl, to go to a wizarding school.

“But maybe,” she thought. “It’s not a coincidence. If the owl can read this address and find me, it can find another address too.” Hermione’s father was on vacation with some friends in the countryside for the week and would be back just in time for her birthday. “If the owl can get better in the next two days, I can write a letter to Dad with the address of the place he is staying, give it to the owl, and the owl will deliver it. It can fly the distance from here to there in a little less than a day. Dad should get the letter before he comes home. Then if he mentions it, I’ll know that the letter is real.”

She would have to wait, something she did not like doing, but that was alright. Hermione put the letter back in its envelope and picked up the box. She took the owl to a shed in her backyard and took the letter upstairs to her room. She laid the letter on her nightstand, looked at it one last time, turned off her lamp and closed her eyes to go to sleep. For a long time though, she could not fall asleep. She was thinking about the letter and all the possibilities of a magical school.

Early the next morning, Hermione awoke to her mother calling her for breakfast.

“Coming, Mum!” she called back as she once again sat up and brushed her hair out of her face. She was tired, not having gotten much sleep the previous night. She turned on her lamp and saw the letter. Suddenly remembering the events of just a few hours before, she bolted out of bed and dressed as quickly as possible. Hermione grabbed the letter and rushed to the kitchen excitedly.

“Mum! Last night, I heard something outside so I went out to look and this letter was on the porch! It says that I was accepted to Hogwarts School of Witchcraft and Wizardry!”

Mrs. Granger read the letter over carefully a few times just as Hermione had done when it first arrived.

“I’m sorry Hermione,” she said. “But it looks like just a very clever and mean joke. It can’t be possible.”

“I know,” Hermione said. “But an owl delivered it and it has our exact address and…”

At the sound of the word “owl,” the owl had flown to the kitchen window. It perched on the windowsill and pecked at the window with its beak. Hermione ran out the backdoor to coax it back into its box and check to see if its leg had begun to heal. When she got to the place where it was standing, it waited patiently and obediently while she checked its leg for signs of damage. The leg however, had completely healed. Hermione was amazed at how it could have healed so quickly, but thought perhaps she had thought the cut was deeper than it really was when she saw it in the dark.

“On the other hand,” the hopeful part of her brain told her, “it could have been magic. There might really be a magic school and the owl might…”

“Stop!” the other part of her brain told her. “Don’t get your hopes up.” Hermione looked at her mum, casually making tea and eggs as usual. Her smile dropped a bit, yet she could not suppress the additional wave of hope that the owl’s quick recovery had brought her.

As the owl seemed well enough to make the journey, Hermione went straight to her room to write a letter to her dad.

If you are getting this letter, then it means that I have been accepted to a magical school, Hogwarts School of Witchcraft and Wizardry. I received a letter last night telling me that I had been invited. Of course, it may not be true and I know it doesn’t sound true. I won’t blame you for not believing me. Mum doesn’t believe me either, but it seems as though the letter was sent by an owl. I am going to ask the same owl to deliver this letter. If you get the letter, please write back, using the owl again so I will know that it worked. I love you and miss you!