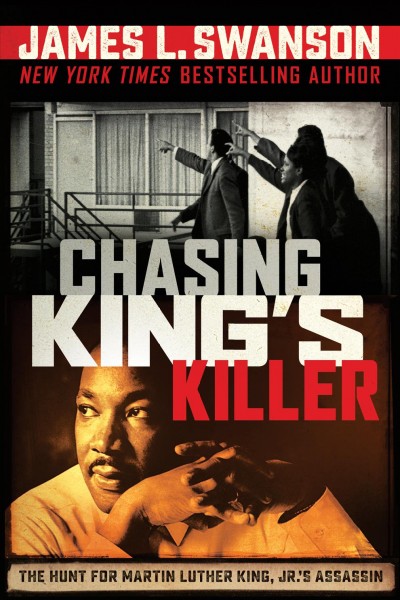 In this dynamic, engrossing narrative, James L. Swanson recounts the life, times, and death of Martin Luther King, Jr., and leads the reader through the furious pursuit of the man who killed him. Contrasting the backgrounds and characters of King and his assassin, James Earl Ray, Swanson brings to life the renowned manhunt, while presenting a dual biography, following King and Ray as their life courses race toward their famous collision.
The book details King’s childhood in Jim Crow America, describing vividly the racism and injustice that were prevalent, especially in the South. It recounts King’s early experiences with racism (his best friend, a white boy, abandoned him after joining a segregated school), the anger he felt toward white people during his youth, and his first encounter with the theory of “nonviolent resistance” when he read Thoreau’s Civil Disobedience in college. The book includes not only quotes from King’s great speeches and relates his tireless work for human rights, but it also describes lesser known elements of his life, such as the hounding King underwent at the hands of J. Edgar Hoover’s FBI and a failed attempt on his life by a deranged woman in New York City.
Chasing King’s Killer is as much Ray’s story as King’s, and I was riveted by the glimpses into his life. Swanson describes Ray’s clever escape from prison in 1967 (he was there for an armed robbery, one of many crimes he commited) and his itinerant, secretive existence as a fugitive between this escape and the murder of King. The many names and appearances he assumed during that time aided him in eluding capture after King’s murder.
The photographs, letters, and details of the investigation included in the book are woven together with the two biographies to create a true crime narrative that is hard to put down.
I highly recommend this book. 4/5 stars.