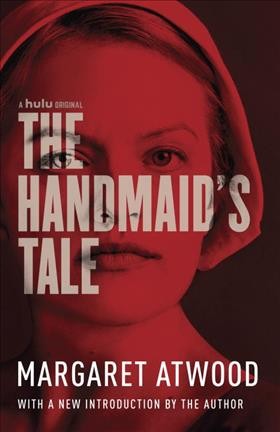 The Handmaid’s Tale is a dystopian classic. American government and way of life have been taken over by extreme Christian fundamentalism due to a scarcely mentioned nuclear war (this book was written in the 50s under the Reagan administration, so the connections are there). Society is focused on the household with traditional gender roles between men and women. A hierarchy has been put into place, most notably for women to help combat infertility caused by radiation. At the highest level are the Wives (high class wives), then the Marthas (maids), Econowives (working class wives), and the Handmaids (whose job is to have bed with the husbands in order to have babies). The head of the household – whose first name the handmaid takes, adding the word ”of” to show possession, such as ‘”Offred,” and ‘”Ofwarren” – is known as the Commander.
Offred is one such Handmaid. In the novel, we learn about her current oppressive life and glimpses of the life she had before America became the terrifying Republic of Gilead. The novel’s most lacking point is the bland narrator.
To avoid spoilers, I won’t go into details, but let it be warned that if you do not like open-ended epilogues, do not read this book. This book will frustrate you with some questions you will never find answers to. Furthermore if you expect Offred to epically escape and tear down the regime, you will be sorely disappointed. This is not a typical dystopian text. Instead this book reads more like a case study, a cautionary study how easily American values can be twisted and trampled into extremism.
To be honest, unless you are super interested in learning more about the setting, I would not recommend anyone my age to read this book. The pacing is too slow for a typical teenage reader. However, if you disliked or outgrew the YA take on dystopia, as in The Hunger Games or Divergent, this novel features a refreshingly different, female take on the classical dystopian genre.
I’ve heard many people compare The Handmaid’s Tale to George Orwell’s 1984, and I for the most part agree, except for one important feature: while 1984 maintains a constant level of intensity, The Handmaid’s Tale is more of a slow suffocation – despite how scary the setting is, there is not a sense of doom. For some this can be a bit of a turn-off, since The Handmaid’s Tale is not exactly a page-turner, but its slowness seems somewhat intentional – a reflection of the dullness of Offred’s own confined life. Anyhow, The Handmaid’s Tale’s TV series adaption on Hulu is coming out soon, so if you’re interested, you might want to pick up the book before then! 3.5/5 stars.

Find this book in our catalog: The Handmaid’s Tale