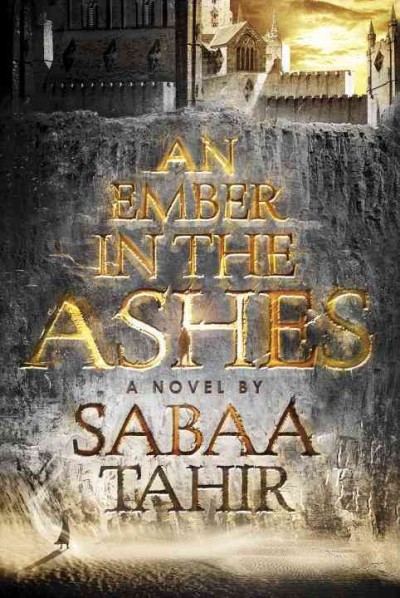 An Ember in the Ashes by Sabaa Tahir

Summary: Under the Martial Empire, defiance is met with death. Those who do not vow their blood and bodies to the Emperor risk the execution of their loved ones and the destruction of all they hold dear. It is in this brutal world, inspired by ancient Rome, that Laia lives with her grandparents and older brother. The family ekes out an existence in the Empire’s impoverished backstreets. They do not challenge the Empire. They’ve seen what happens to those who do. But when Laia’s brother is arrested for treason, Laia is forced to make a decision. In exchange for help from rebels who promise to rescue her brother, she will risk her life to spy for them from within the Empire’s greatest military academy. There, Laia meets Elias, the school’s finest soldier — and secretly, its most unwilling. Elias wants only to be free of the tyranny he’s being trained to enforce. He and Laia will soon realize that their destinies are intertwined — and that their choices will change the fate of the Empire itself.- From the publisher

For many years the Scholar nation has been controlled and abused by the Martial Empire. A young Scholar named Laia is forced to watch her grandparents killed and her brother jailed for drawing weapons. She flees to a resistance group who gives her a mission to spy on a military school in exchange for her brother’s freedom. Meanwhile, a final year named Elias in the same Martial Empire’s military school plans to desert. However, he is forced to take part in a competition to find the new emperor. Through fate the two of them meet and work together to achieve their goals. However, things go wrong, and many problems arise. Laia gets closer and closer to being discovered, and Elias starts to lose the competition. Will Laia get her brother back? And will Elias win the competition? This book was an interesting read. I enjoyed the universe and mythology the writer created. The characters and world felt real to me, and I could understand what was happening. However, the author could have elaborated more on the military academy. Despite most of the story happening at the military academy, I didn’t know much about the academy itself. It deserves 4/5 stars.– Jacob Chon, grade 9

Find this book in our catalog: An Ember in the Ashes