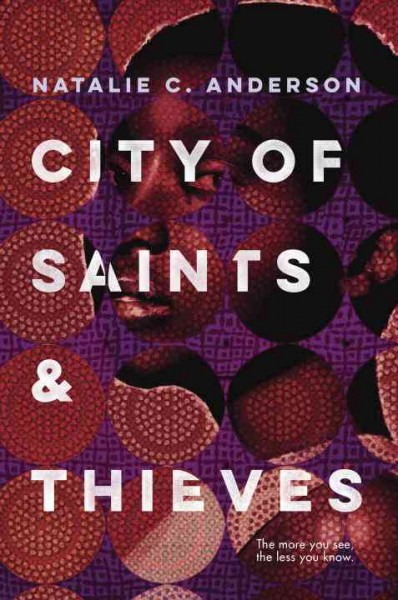 City of Saints and Thieves by Natalie C. Anderson

A good mystery book is always fascinating because of the slight hint of what one might call “the otherworldly”. There is a moment when intuition is the only thing leading the protagonist towards the final answer. Some of these instances couldn’t quite possibly happen in real life. Why am I mentioning this? Because this idea has something to do with why I liked this particular book.
Set in the city of Sangui and Congo, City Of Saints and Thieves follows sixteen-year-old Christina “Tina” Yvette, who is seeking revenge for her mother’s murder. After joining a gang – the Goondas – she trains every single day of her life to one day kill who she thinks is the murderer – a rich man named Mr. Greyhill. Her attempt is foiled when Mr. Greyhill’s son catches her in the act. The plot takes a twist when the backstory of it all is released: Mr. Greyhill’s son Michael and Tina used to be close childhood friends. Michael, now a sturdy teenager, agrees to a compromise with Tina: he disproves her suspicions with the evidence that his dad is not the murderer, and Tina doesn’t release the dirt she hacked out concerning Mr. Greyhill’s wealth. The story is perpetually engaging since a wide range of obstacles interrupt them in their process. The Goondas are mad at Tina for not carrying out the murder and escaping with the money and are on a constant pursuit as Michael and Tina are behind Anju Yvette’s killer.
The thing I like most about this book is the realistic plot. While the story is narrating someone’s revenge, it doesn’t fail to capture both sides of Sangui City and Congo: the rich and the poor. The scenes are alike to several cases of exploitation we hear in the real world and doesn’t fail to portray the effects of war on families trying to make ends meet. In my opinion, what really holds the story together is the mysterious backstory of Tina’s mother. Who was she before she gave birth to Tina? Why are there so many people that hate her? Why are the Goondas so determined to not let Tina discover the real story? The growing hysteria and realistic theme, with a touch of romance, make this a must read for anybody interested in mystery and crime. 4.5/5 stars.

Find this book in our catalog: City of Saints and Thieves