Our staff and Library friends are putting the “Boo!” in Book Face Friday this week, with some suggested spooky reads to send you into the Halloween weekend. All of these frightful titles are available with your Pasadena Public Library card–so check them out for some thrills. Or search the catalog for “horror tales” for others. But you’ll have to take your own “shelfies” if you dare! 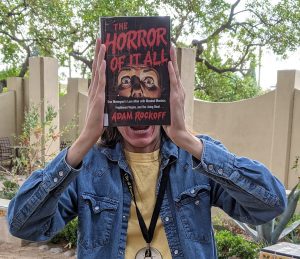 The Horror of It All: One Moviegoer’s Love Affair with Masked Maniacs, Frightened Virgins, and the Living Dead

Horror films have simultaneously captivated and terrified audiences for generations, racking up billions of dollars at the box office and infusing our nightmares with unrelenting zombies, chainsaw-wielding madmen, and myriad incarnations of ghosts, ghouls, and the devil himself. Despite evolving modes of storytelling and the fluctuating popularity of other genres, horror endures. The Horror of It All is a memoir from the front lines of the industry that dissects (and occasionally defends) the hugely popular phenomenon of scary movies.

Author Adam Rockoff traces the highs and lows of the horror genre through the lens of his own obsessive fandom, born in the aisles of his local video store and nurtured with a steady diet of cable trash. From Siskel and Ebert’s crusade against slasher films to horror’s Renaissance in the wake of Scream, Rockoff mines the rich history of the genre, braiding critical analysis with his own firsthand experiences. Be afraid. Be very afraid. 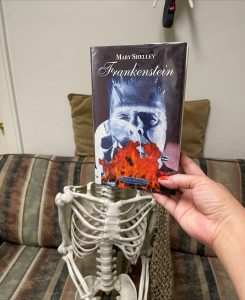 At the age of eighteen, Mary Shelley, while staying in the Swiss Alps with her lover Percy Shelley, Lord Byron, and others, conceived the tale of Dr. Victor Frankenstein and the monster he brings to life. The resulting book,Frankenstein; or, The Modern Prometheus, is a dark parable warning against the risks of scientific and creative endeavor, the corrupting influence of technology and progress, and the dangers of knowledge without understanding. Frankenstein was an instant bestseller on publication in 1818 and has long been regarded as a masterpiece of suspense, a classic of nineteenth-century Romanticism and Gothic horror, and the prototype of the science fiction novel. Though it has spawned countless imitations and adaptations, it remains the most powerful story of its kind.

Read the classic, or visit the link to find the many adaptations, in film, graphic novel, or other forms, that have been inspired by the original. 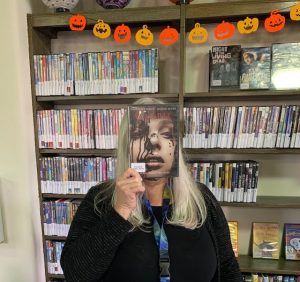 In one way or another, everybody abused Carrie. Her fanatical mother forbade this sixteen-year-old misfit everything that was young and fun. She was teased and taunted by her classmates, misunderstood by her teachers, and given up as hopeless by almost everyone. But Carrie had a secret: she possessed terrifying telekinetic powers that could make inanimate objects move, a lighted candle fall, or a door lock. Carrie could make all kinds of startling bizarre, and malevolent things happen. And so she did one night, when feeling scorned and humiliated, and growing angrier and angrier, she became the vengeful demon who let the whole town feel her power.

Another classic horror story; read Stephen King’s novel, or watch one of the handful of film adaptations, starring Sissy Spacek (1976), or this one with Chloe Grace Moretz as Carrie (2013).

In the genre’s peak period (1951-1954), before it almost destroyed the comics industry, before the watchdog groups and Congress, over fifty horror titles appeared each month, and Four Color Fear collects the finest of these into a single robust and affordable volume. EC is the comic book company most fans associate with horror: therefore, for the average reader there remains unseen quite a batch of genuinely disturbing, compulsive, imaginative, at times even touching, horror stories presented from a variety of visions and perspectives, many of which at their best can stand toe to toe with EC. In Four Color Fear, the better horror companies are represented, and artist perennials contribute both stories and covers, with many of the forty full-sized covers created by specialists Bernard Baily, L.B. Cole, William Eckgren, and Matt Fox. 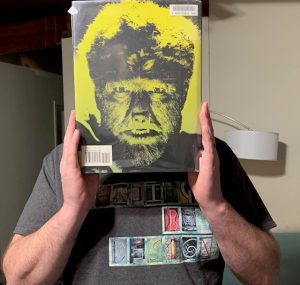 Universal Studios Monsters: A Legacy of Horror by Michael Mallory

From the 1920s through the 1950s, Universal Studios was Hollywood’s number one studio for horror pictures, haunting movie theaters worldwide with Dracula, Frankenstein, and the Creature from the Black Lagoon, among others. Universal Studios Monsters: A Legacy of Horror explores all of these enduring characters, chronicling both the mythology behind the films and offering behind-the-scenes insights into how the films were created. Universal Studios Monsters is the most complete record of the horror films of this legendary studio, with biographies of major personalities who were responsible for the most notable monster melodramas in film history. The stories of these films and their creators are told through interviews with surviving actors and studio employees. A lavish photographic record, including many behind-the-scenes shots, completes the story of how these classics were made. This is a volume no fan of imaginative cinema will want to be without.

Have a safe and happy Halloween weekend!