Halloween is fast approaching, a day when the world of the living converges with the world of the dead and when our imagination merges fantasy with reality. It’s a holiday that is filled with fun and fright as young and old don costumes for a night of tricks and treats, a carryover from the ancient Celtic festival of Samhain from which it originated. During Samhain it’s said that the spirits of the dead return to earth. And so it’s around this time of year that our minds are on all things ghostly and ghoulish, and what better way to get in the spirit of Halloween than with a good scary story!

Here are some spooktacular scary reads recommended by library staff for the spooky season. These stories definitely put the BOO in books and will make you sleep with one eye open! 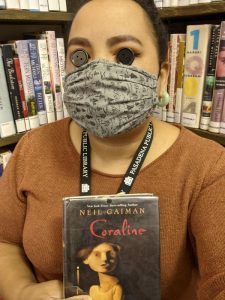 Coraline follows a lonely girl who, upon exploring her new house, discovers a doorway to another world that is almost identical to her own…but not quite.  I thought being a juvenile book it’d be light on the spookiness, but I was wrong! You feel uneasy reading it, like something’s not quite right, and little by little you learn just how wrong it all is.  The book also has some FANTASTIC illustrations that every time I see buttons I’m reminded of some of the illustrated scenes.  This is also one of the few books that my sister (who’s not a big reader) couldn’t put down when I passed it on to her. After I lost count of the times she asked me to check it out for her again, I bought her a copy, and when they made a movie adaptation, we went to see it together. 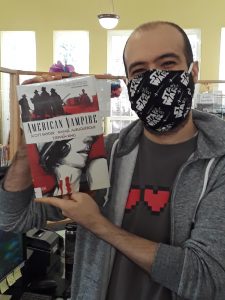 American Vampire takes on a more modern approach to the classic vampire. It’s written by Scott Snyder with some help from the horror master Stephen King. We learn about a new type of vampire in the old American west, one that is just as ferocious as the classic monster but can withstand being out in the sunlight. Eventually we get to the early days of Hollywood with real cutthroat competition. It’s a dog-eat-dog world out there. Or in this case, a vampire eat vampire.

The book is a lot of fun to read. Definitely for adults as it includes a lot of what made vampires, the old west, and Hollywood popular. It has a nice twist on the popular vampire story with a lot of old Dracula-inspired mythology thrown in. It is interesting to see vampires trying to adjust to the 1900s as technology and entertainment start ramping up in American history.

Available in print and also through Hoopla! 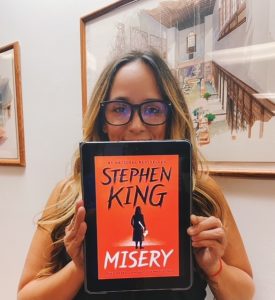 This truly is a must read for anyone who loves psychological horror thrillers. It’s my first Stephen King book, and I think it’s a perfect starting point in the Stephen King world. Annie Wilkes is basically the most terrifying human being ever. It follows the semi-popular author Paul Sheldon who gets into a car crash and is “rescued” by a former nurse, Annie Wilkes, who takes him home with her. Annie turns out also to be his number one fan—and when she finds out he has killed her favorite character in his latest novel, she is not happy at all. At the mercy of his captor, Paul must now write a new novel that will bring back Annie’s favorite character Misery. What else does Annie want from him? What are her intentions? Where is this house he’s held captive in? Will he ever get out of there alive and in one piece? Read the book and find out! 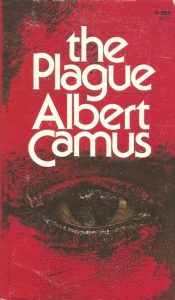 The Plague by Albert Camus ~ recommended by Marie

I know The Plague by Camus is an existentialist (absurdist) novel and perhaps not “Halloween” perfect, but it speaks to what happens when an “epidemic” affects the lives of a town (a country, the WORLD).  Sound familiar?  It lays the groundwork for highlighting the best and worst of humanity and also points to the scariest element in any “horror” or “scary” story—the feeling of having no control over one’s destiny, the feeling that you are caught in a story of supernatural proportions that is bound to take you under…the feeling of FEAR. Let me just say that this book is so prescient and even if you don’t fall in love with it, you’ll have to admit that it belongs in the category of great literature because it holds some universal truths about the human condition.

The story was published in 1947 and is set in the French Algerian city of Oran, where a plague sweeps through, killing many.  The “scary” part for me is that Camus chose Oran, knowing that a cholera epidemic swept through the city in 1849, killing a large portion of the population.  Even more frightening, Oran was decimated by the bubonic plague in 1556 and 1678. The city experienced smaller outbreaks of the bubonic plague between 1921 and 1944, the last one popping up right before The Plague was published.  (Gives me chills!)

There are so many parallels between what happens to the characters in the book and the multiplicity of societal responses, and what we see happening right NOW as we move through the Covid pandemic.  To coin and build upon an old cliché:  Truth is stranger and “scarier” than fiction. 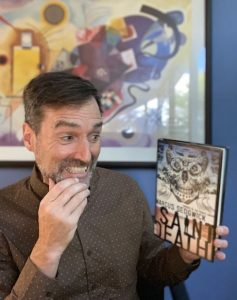 Marcus Sedgwick writes wonderful suspense novels for young adult readers. Revolver, Midwinterblood, and Saint Death are some of my favorites.  With Saint Death, we have a fast-paced thriller about migrants, drug lords, and gang warfare set on the US/Mexican border.

Faustino is trying to escape from the gang he’s been working for. He’s dipped into a pile of money he was supposed to be hiding.  Now he’s on the run. He and his friend, Arturo, have only a day to replace the missing money. If they can’t, they’re both as good as dead. Santissima Muerte (or Saint Death) watches over the story as the hours race by.  This is a scary story that makes you ponder how much responsibility do those of us in the middle have for those at the bottom. 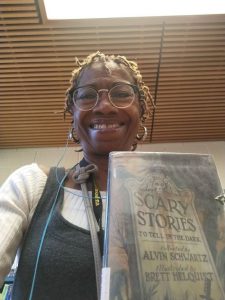 This book is a collection of scary short stories, and my particular favorite is the “Haunted House.”

There was a house that through the years many of the townspeople had experienced unusual occurrences and were too afraid to stay overnight, so the town’s preacher decided to put an end to the gossip about the home being haunted. One night he brought his Bible and set off for his overnight adventure. Needless to say as it began to get darker, he began to hear noises as he could hear footsteps coming up the stairs from the basement. Soon a ghost-like woman appeared through the door as the preacher put up his Bible to ward her off but to no avail. After a while, the woman expressed her wants and the preacher was ready to oblige her. She wanted her killer exposed and explained her reasoning for haunting the house.

Her request was granted during church mass as her killer was divulged. She promised she would go away as long as her killer was brought to justice. He was hanged but the ghost lady didn’t exactly leave the house. When the preacher returned to the house to ensure that it was no longer haunted and guests could return, the woman was still there where she held onto the preacher’s coat, the print of her bony fingers was burned right into the cloth of his coat and it NEVER DID COME OUT! 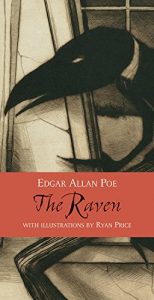 This is the same classic poem by Poe that most people already know and love, except this edition is adorned by the beautiful and haunting sepia-tone art of Ryan Price. The illustrations add to the confusion, pain, and horror Poe conveys throughout the poem in a relatable and somehow familiar way. I read the original as part of a collection back in high school but this illustrated version I picked up a few years ago is the one I think of in my head any time “The Raven” is mentioned. I can envision the real life Poe curled into a ball as the Raven squawks “Nevermore” just as Price drew him. In my opinion, this edition is perfection. 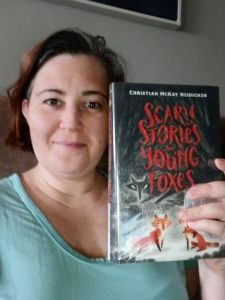 “Bambi” meets “Saw” in this children’s book that will give even grownups chills!

This book is a gripping epic about two very unfortunate fox kits whose lives intertwine just as they are coming of age. The stories of their lives are told by an unknown narrator who is a fox telling scary stories to a group of young kits. The stories are expertly crafted and downright chilling, filled with encounters with monsters out in the wild as well as monsters within a kit’s own family. It even includes a creepy and bone-chilling version of the beloved author Beatrix Potter! Heidicker does a masterful job of keeping us squarely in the perspective of a fox, while also including real insights about life that make the tales seem universal. You may even find it heartwarming at times, but don’t pout—you’ll get plenty of thrills and chills along the way! 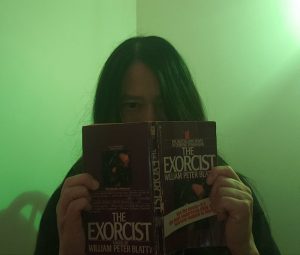 The Exorcist by William Peter Blatty ~ recommended by Young

Of all the scary books I’ve read that deal with the supernatural, I have to say The Exorcist by William Peter Blatty is by far the scariest. What makes it so terrifying is that it was inspired by a true story about a boy who went through an exorcism in the 1940s. In Blatty’s novel, a young girl named Regan becomes possessed by a demon after playing around with a Ouija board. Soon strange things begin to happen such as scratching and knocking sounds coming from her room and furniture inexplicably being moved around the house. Her mother, Chris MacNeil, becomes concerned when her daughter starts to act out and getting angry and agitated for no apparent reason. At first she thinks it might be a psychological issue and takes her to see a doctor, after all Regan was still trying to make sense of her parents’ divorce. However, when her behavior and appearance drastically change and she becomes almost a different person as the malevolent entity takes over her body, Chris is forced to reach out to a Jesuit priest named Father Karras who might be the only hope to save her daughter from a real or a metaphorical demon inside her. The Exorcist, like many stories of this genre, recounts an age-old story about good versus evil, but it’s also one about faith and science and that between the two there’s still so much we don’t know. It’s a must-read for anyone who loves reading books about demonic possession and the paranormal. I also recommend watching the movie by the same title. Both are horror classics that will scare the courage and skepticism out of you!