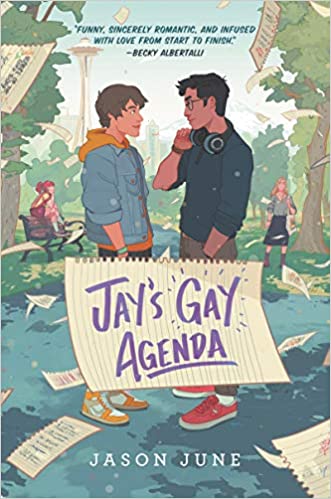 Jay’s Gay Agenda by Jason June is a quirky gay rom-com. In it, Jay, a gay male teenager who has recently come out to everyone is devastated that despite the statistics behind it, he is the only out gay person in his high school or the entire town, when by his calculations there should be at least 3. The issue Jay is facing is that he is finding it difficult to complete his gay agenda due to the lack of gay people around him as well as him struggling to accept his best friend drifting apart after she got a boyfriend. When Jay moves to a new city after his mom gets a promotion, he is excited to find out his new high school has an active LGBT community and it does not take long for him to find someone and make progress on his gay agenda, but could this move cause troubles for Jay in the long run?
I enjoyed the book, and I can honestly say it did a very good job at telling a fairly realistic gay love story because the issue Jay faces at the beginning (with being the only gay person in the town) is one a lot of queer people face. One thing I felt was incredible was how realistically it captured teen relationships as they are not a straight line but instead have their ups and downs. The book also does a great job at going over the topic of sex as I would consider it a sex-positive book.
Now the thing I hated most about the book was how the author depicted Jay as a very unlikable character. He kept lying and cheating on his friends and loved ones that by the end of the book, you might think he was a sociopath. Overall, I enjoyed the book and would probably have it higher in my favorite book list if Jay were a bit more likeable. I would recommend this book to anyone who is interested in a good rom-com novel and to any member of the lgbtq+ community who wants to read some work that features more representation from our community.
3.5 stars.