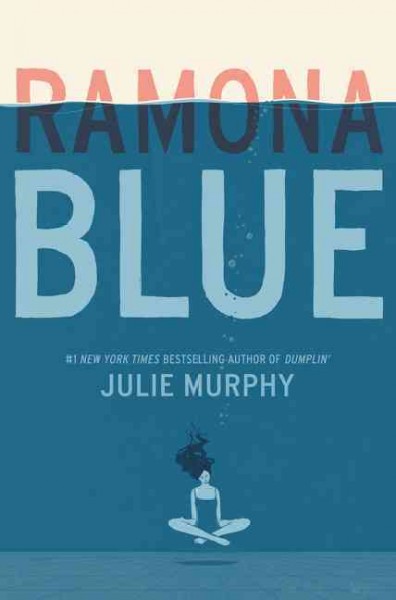 Ramona Blue is a girl-vs-the-world contemporary romance novel. Its protagonist, a 6’3, blue-haired teenager named Ramona, lives in a trailer park in Eulogy, Mississippi with her father and pregnant older sister. The book follows her struggles to navigate various obstacles in her life, including her negligent parents, her sexuality crisis, and her yearning for an escape from a claustrophobic town.
Ramona, luckily, is a likable protagonist. I say “luckily” because, while I honestly believe that Julie Murphy has created one of the most interesting female characters in contemporary YA fiction, the narrative in which she’s situated is a bit lacking in conflict or tension. The book feels very much like a character study, and I appreciate that it maintains a sense of authenticity and realness throughout, but there are times when that authenticity translates into predictability, and there are some points, not too many, but some, where the chapters drag on much longer than they need to. Ramona’s commentary and character development, however, help a lot to liven up dull scenes, and I saw a lot of my own concerns and questions about the future reflected in Ramona’s ruminations. She’s a relatable and sympathetic protagonist, but at the same time, she brings something very unique.
Ramona Blue was also enjoyable for me not so much because it was a good romance novel, but because it beautifully explored escapism. I never felt particularly moved by Ramona’s problems with love, but I was intrigued by her struggles with identity and growing up, and how her discovering her own sense of self shapes her relationships. The story that emerges from Murphy’s careful exploration of these themes is very heartfelt and stayed with me even after I finished the novel.
I heard that the book had sparked some controversy due to its depiction of bisexuality, and I agree somewhat with the complaints. Ramona is presented as a person who initially believes herself to be a lesbian, and then realizes that she is also attracted to men, but it almost feels as though Ramona actually turns straight after falling in love with her male childhood friend, Freddie. Of course, there’s nothing wrong with someone realizing that their sexual identity isn’t what they first thought it was, but I found the way Murphy handled this element of Ramona’s character to be a little strange—not distasteful and not jarring enough to detract from my overall enjoyment of the story, but just a little strange.
Ramona Blue is an excellent story with a strong protagonist and an emotional exploration of identity and age. The book has some slow moments and I didn’t find the romance aspect of this romance novel very interesting; but, overall, I would recommend it to fans of YA fiction. 4/5 stars.
(P.S. If you happen to be a fan of Dontnod Entertainment’s critically-acclaimed video game Life is Strange, you might really enjoy this book! I found a lot of similarities in the themes and characters.)

Find this book in our catalog: Ramona Blue