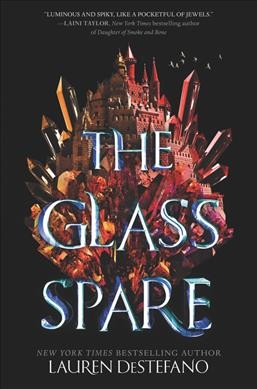 The Glass Spare by Lauren DeStefano

The Glass Spare, by Lauren DeStefano, has the interesting premise of the observation of a character set in the Middle Ages. Wil Heidle, daughter of a king with empire-building dreams, is hidden away from the kingdom, unlike her siblings. She is born and raised as a spy, to aid her father and his dreams of expanding his kingdom. However, she discovers a terrible power she has within herself, and, after tragedy strikes, she leaves her family to find her redemption. While on this quest, Wil meets a prince, one with interesting intentions that Wil finds in conflict with her own. Will the two save what they love?
This book is a solid piece of writing. It has the standard plot with lots of twists, and had me attached to the characters by the end of the book. However, as it is a book in a series, it did leave me feeling like the story was not finished. I really did not like the whole magic thing Wil has, but it is something that is needed to drive the plot. Ultimately, I really cannot recommend this book over another of the same genre, since it feels fairly generic at times and the pacing is not quite as good as it needs to be. 3.5/5 stars.

Find this book in our catalog: The Glass Spare