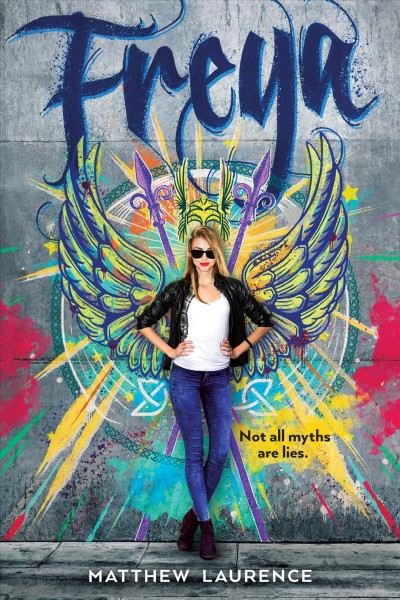 The novel Freya by Matthew Laurence is about a goddess, Freya, who, in Norse mythology, is the representation of love, beauty, and war. In this world, deities of all types exist, camouflaged into human society. They are powered and strengthened by belief, and brought down with disbelief and hate towards them, until they fade out of existence in extreme circumstances. Freya is a relatively weak goddess, a sliver of who she once was when believed by thousands across the globe; now, she has little to no believers, needing a job and more believers to rise to her full power and potential.
The plot starts off at a mental hospital. Freya is stationed there, pretending to have a mental health condition as it’s a safe place which provides her with food and shelter. However, her haven is interrupted when a man, Garen, appears out of nowhere with a stun gun for mortals and a proposal. It follows as such: Join this mysterious organization and gain all the believers she can wish for, or go against it, decline his offer, and get disbelieved out of oblivion. She chooses none. Instead, she decides to flee with a mortal, young adult named Nathan, who becomes her close friend and companion.
Further on in the book, the mysterious organization is named, and all sorts of unexpected things happen. But, it remains a constant looming threat for Freya whenever she is concerned, and it is much, much bigger and more complicated than she thinks.
All in all, this book was phenomenal. The beginning parts were a bit slow, mostly because I thought Freya vain and shallow with how she prioritized clothes and fashion over finding an undetectable home base; but, as I got further into the book, I grew to like her unorthodox personality. I think Laurence did a fantastic job of writing from a goddess’s point of view, capturing how little and irrelevant humans’ lives and years are to them compared to the eons of time they have lived, while making it interesting and intriguing for us to read. The humor and pure wittiness in several exchanges between characters was well-written and fun, while not being overdone.
I also adore Nathan and Freya’s friendship, because for once in a young adult fiction/fantasy book, there’s a male and female relationship which isn’t romantic. At the beginning, there may have been some hinting of a future romance, but it’s more of one-sided gawking. Freya’s blunt personality, oversight, and overconfidence paired up with Nathan’s wry wit, outgoing personality, collectiveness, and attention for detail make for a great friendship. They are three-dimensional, well-developed characters who do not fully fit into any personality type or cliche, which is hard to do especially with already thought-out ideals like deities. I would have liked to see more of a character arc for Freya as she progressed through the book; however, she is amazing as she is.
A hard balance to keep is the one with developing the characters or the plot, but I think that was handled with mastery in Freya. The plot, while simple, has plenty of twists, turns, and moral grey areas, a quality I admire in plots. It wasn’t hard to understand nor complicated, but still remained thrilling and exciting in the correct areas and somber in others. As I’ve already stated, the characters are brilliant. Even the “side” and “bad” characters have reasons for doing what they do—there is nothing I hate more than an evil character blindly hating or destroying for the fun of it.
In conclusion, this book was great, and I’d recommend it to anyone who has a sliver of interest in fantasy, mythology, or fiction in general. Four and a half out of five stars.

Find this book in our catalog: Freya