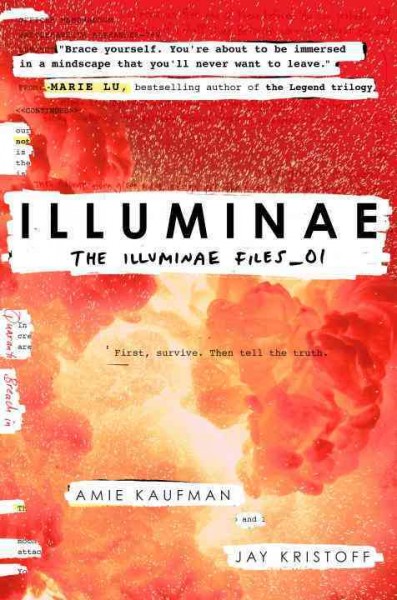 Summary: This morning, Kady thought breaking up with Ezra was the hardest thing she’d have to do. This afternoon, her planet was invaded.
The year is 2575, and two rival megacorporations are at war over a planet that’s little more than an ice-covered speck at the edge of the universe. Too bad nobody thought to warn the people living on it. With enemy fire raining down on them, Kady and Ezra—who are barely even talking to each other—are forced to fight their way onto an evacuating fleet, with an enemy warship in hot pursuit.
But their problems are just getting started. A deadly plague has broken out and is mutating, with terrifying results; the fleet’s AI, which should be protecting them, may actually be their enemy; and nobody in charge will say what’s really going on. As Kady hacks into a tangled web of data to find the truth, it’s clear only one person can help her bring it all to light: the ex-boyfriend she swore she’d never speak to again.
BRIEFING NOTE: Told through a fascinating dossier of hacked documents—including emails, schematics, military files, IMs, medical reports, interviews, and more—Illuminae is the first book in a heart-stopping, high-octane trilogy about lives interrupted, the price of truth, and the courage of everyday heroes. – Goodreads

Set in space, Illuminae encompasses many more genres than just science fiction. It’s also about romance, human nature, and a touch of horror. The story starts out on an illegal mining colony, far away from civilization. It’s attacked by a corporation that is seeking to destroy it. Only a timely intervention by a battlecruiser owned by the government saves the population. The command on board immediately begins to recruit the populace to replenish their numbers. The main character, Kady, dealing with her breakup with her boyfriend, Ezra, dodges the ban and instead uses her hacking skills to poke around the ship. When the AI suddenly nukes another craft in their fleet, they have to wonder what they really signed up for.
This book blended the themes perfectly. It portrayed a disaster and the results well, all from the point of view of various emails, memos, documents, and messages. I liked how the story wasn’t told in full from one point of view; rather we rarely saw what the characters didn’t project into reality. It really made me cherish those few occasions the reader saw into a character’s diary. However, the ending, which I won’t spoil, felt a bit underwhelming, as it left me feeling as if the writers were lazy in trying to end the book. It does, however, hint at a sequel, which I will be reading next. All in all, I enjoyed this book for the most part. 4 stars.

Find this book in our catalog: Illuminae