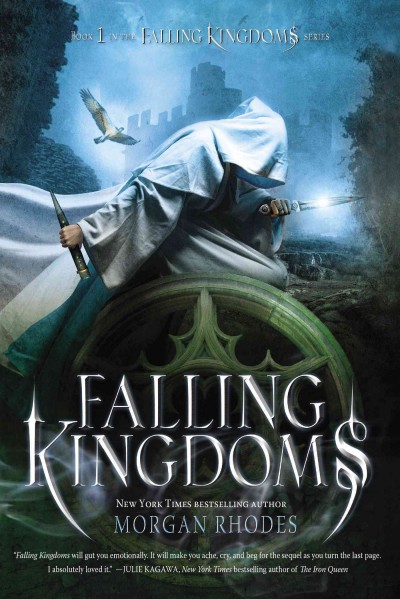 Even if you’re a fan of magic and kingdoms, you may not like this story; participants at the YA Book Club this April meeting didn’t, even though 3 out of 4 of us enjoy fantasy novels. The fantasy novel this month was Falling Kingdoms, the first book in the series of the same name, written by Morgan Rhodes. With the least amount of spoilers and offense to the characters involved, all that can be said is that there are three kingdoms between which war ensues, involving a useless princess and her guard, a sorceress, a prince who’s in love with his sister and thereby turns into an insufferable jerk when he’s rejected, a boy who hates every form of royalty, exiled goddesses whose powers are pretty much useless, a good King, evil King, and phony chief.
Each character, we observed, was annoying, underdeveloped, and too exaggerated in their personalities. Cleo, the princess, was a bit naive, the sorceress was too nice, the prince was too much of a jerk and overprotective of his sister, and the boy, Jonas, was too angry. Each character was either going overboard or underboard with their emotions and there was never a balance. The only character who seemed to have a reasonable explanation as to why his emotions were so over the top was Jonas; he hates all royalty because royalty killed his family. But even then, we didn’t think he should’ve gone and killed a whole kingdom because of it.
Despite these flaws of the characters, our favorite characters were Lucia and Jonas, and our least favorites were Cleo and Magnus (to be honest, we couldn’t find any good qualities that would distract us from their flaws). One of us hated all the characters(!).

Laying aside our love and hate for the characters, we enjoyed the progression of the novel, including a few other concepts. We liked the backstories of the characters, but we thought they could have been introduced in a way that didn’t abruptly interrupt the flow, but instead was rather unified with the plot. We enjoyed the originality of the involvement of magic; it was known but rare and forbidden. We liked the representation of some of the characters: King Corvin represented benevolence, Gaius represented evil, Basilus represented having no political power and being weak, and the exiled goddesses being old ladies symbolized physical weaknesses and intellectual wisdom. However, there were some things we didn’t like at all.

We thought the romances were too much to handle. There were way too many love triangles; it was almost exhausting. We thought the attraction of Magnus to his sister, Lucia, was just plain creepy while Cleo and Theon’s love was so quick it was ridiculous. Jonas’ attraction to Cleo was contradictory to the fact that he hated all royalty, so we could tell that was forced in. Overall, we determined the book would be better off without all the “love”.

What do we expect for the sequel? Well, two of us already read three of the books in the series. The first book’s been spoiled enough, so nothing can be said about the sequel- except that there are more love triangles coming our way. Because of this, some of us won’t be reading the sequel- and we’ve rated Falling Kingdoms an average of 2.12 stars out of 5.

Obviously not many of us liked the story, but we can guarantee you we loved the book cover.

Find this book in our catalog: Falling Kingdoms