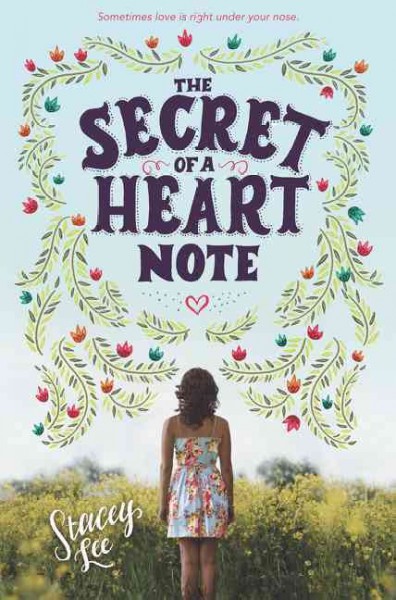 The Secret of a Heart Note by Stacey Lee

The first book I read by Stacey Lee was Under a Painted Sky, a historical page turner addressing racism, loyalty, and freedom. It was one of the best books I’d read all year, so when I saw that Lee was the author of The Secret of a Heart Note, without reading the summary, I knew it’d be a good read.
The first thing I’m informed of when I open the book is that heartache smells like blueberries, Mimosa No-Last-Name’s unknown client does not smell like this, and therefore she’s in the workshop crushing cinnamon into powder instead of doing her algebra homework. It’s a normal day for her as a teen aromateur– a person with an extraordinary sense of smell that can match heart notes to make an elixir that will make people fall in love. But, she can’t compare her normal day to anyone else’s. She and her mom are the only aromateurs on the planet. It’s been that way since Mim’s Aunt Bryony lost her sense of smell after falling in love, due to the curse set upon them: if you fall in love, you lose your ability to smell.
To be honest, as much as I enjoyed the pace of the storyline, this concept- which is the most important rule- is debatable. As aromateurs, they’re supposed to help people fall in love, and guarantee life long satisfaction. But ALSO as aromateurs, they have no personal experience with love. As these kinds of people, they don’t believe in obtaining a partner normally, so in the end, they’re manipulating the other person’s heart. Love is about truth, not manipulation. It’s also not supposed to be about loss.
And it turns out that in the chain of events that occurs, her mother, Dahli, lied to Mim about the rule to protect her daughter and shelter her- while not accepting her own experience with love. Therefore, Dahli thought of love as a form of loss. With these beliefs in mind, she didn’t believe in what she did for a living, and everything she did was based on a lie.
This whole concept ran the story- it determined the struggles Mimosa went through as she navigated high school, trying to be a normal teenage girl- which she wasn’t. She struggled with who she was and who everyone wanted her to be. She was trying to be two different people at once, all because of this rule that turned out to not even be real in the first place.
Other than that, The Secret of a Heart Note was a good read, as predicted. It was a fairly quick one, at that, yet extremely predictable, which disappointed me. (From the summary itself, you would know the two major things that happen in it). It was not at all similar to Stacey’s last book, which was unexpected, and it was very different from all other YA novels, thus being very original. But like many YA books I’ve come across, one key characteristic was missing.
This quality was character development. While Mimosa was the character the reader knew most about, every other one was either partially developed, like her crush, or a complete mystery, like her mother. Many issues associated with characters would be mentioned and witnessed, but after one time, never again. Lee would make character problems important and in the spotlight, such as Mim’s crush’s father’s abusive nature, and after one scene, she would push it in the background, never to be spoken again. Lee didn’t need to do that. If she only mentioned it one time and not allowed these important events to have any impact on the plot, she shouldn’t have put it in at all. A lot of these scenes occurred in this story, which slightly irritated me.
To be honest, I wouldn’t read this book again. For some reason, it’s the kind of novel that holds my attention for the first time, and afterwards I’ll never read it again. But it was good for the first time. 4 stars.

Find this book in our catalog: The Secret of a Heart Note