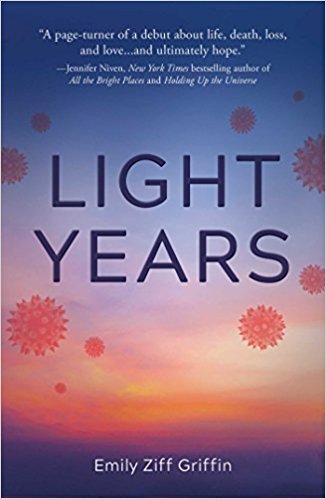 Light Years by Emily Ziff Griffin is coming of age/adventure story about a teenage girl named Luisa whose world is thrown into chaos when a deadly virus called ARNS kills thousands around the world. She is forced to leave behind her old life, which includes a scholarship from notorious entrepreneur Thomas Bell (granted to Luisa for her coding skills), as survival becomes the sole priority in a society ravaged by paranoia. But after Luisa receives a mysterious string of messages that may hold the cure to ARNS, she sets aside her fears and embarks on a journey to change the fate of the very world.
After reading the first few chapters, I noticed that Luisa seemed to have some form of synesthesia — she described certain sights with smells, she likened feelings to colors, etc. It was a mechanic that I at first thought felt out of place, but I grew to appreciate as the novel is heavily focused on emotion, senses, and the human mind. The book was utterly overflowing with atmosphere, which is most likely a result of Griffin’s close attention to detail when it came to describing Luisa’s world. Light Years painted a vividly realistic and grim image of a chaotic, virus-stricken society. However, it didn’t forget to sprinkle in a sense of admiration and wonder that made it so effective as a coming of age story from the perspective of a thoughtful teenage girl.
It became clear from the first chapter of the novel that Emily Ziff Griffin understands how to respect her protagonist. Luisa is an intelligent yet thoughtful character who endures immense grief — making her easy to sympathise with. However, although she was certainly a realistic depiction of a teenage girl, she lacked any sort of distinct character traits aside from her synesthesia. From her underdeveloped love interest to her tendency to make rash decisions despite her intelligence, Luisa reminded me of countless other female protagonists in young adult novels.
The setting and plot in Light Years were similar to the protagonist in that they weren’t particularly good, but not particularly bad either. Griffin gives us some intriguing background to the story regarding a terrorist attack that devastated the United States and resulted in the creation of a peacekeeping society called Front Line, and yet this interesting piece of world building contributes very little to the story and overall feels like a rushed addition to the novel. Likewise, Light Years has a very interesting premise, and even though the book had some plot twists that were obvious attempts at keeping the reader engaged, Luisa’s journey to fight ARNS never carried any real emotional weight and overall failed to keep me on the edge of my seat. The ending, too, was quite strange and abrupt, and leaves the reader without any sense of closure (although this may be intentional if the author plans to write a sequel.)
Light Years is a quick read with a mediocre plot and characters, but with interesting writing mechanics and a strong handle on the themes of hope and growing up. I give the book a 3/5 stars.