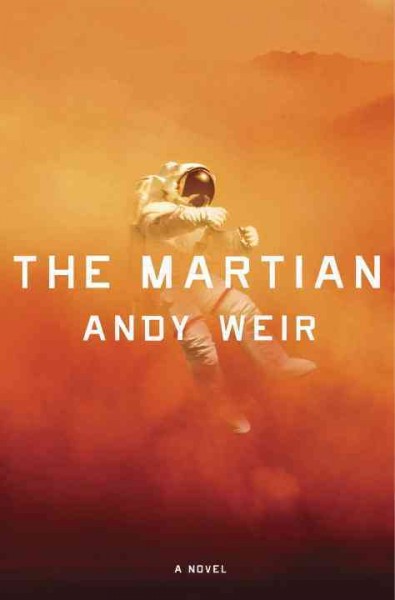 The Martian by Andy Weir

Summary: “Six days ago, astronaut Mark Watney became one of the first people to walk on Mars. Now, he’s sure he’ll be the first person to die there. After a dust storm nearly kills him and forces his crew to evacuate while thinking him dead, Mark finds himself stranded on Mars’ surface, completely alone, with no way to signal Earth that he’s alive. And even if he could get word out, his supplies would be gone years before a rescue could arrive. Chances are, though, Mark won’t have time to starve to death. The damaged machinery, unforgiving environment, or plain-old “human error” are much more likely to kill him first. But Mark’s not ready to quit. Armed with nothing but his ingenuity and his engineering skills–and a gallows sense of humor that proves to be his greatest source of strength–he embarks on a dogged quest to stay alive, using his botany expertise to grow food and even hatching a mad plan to contact NASA back on Earth. As he overcomes one seemingly insurmountable obstacle after the next, Mark begins to let himself believe he might make it off the planet alive. But Mars has plenty of surprises in store for him yet”–Dust jacket flap. — from the publisher

In The Martian, the debut novel of Andy Weir, astronaut Mark Watney is stranded on Mars after his crew had to evacuate from a dust storm. Believing Watney to be dead, the crew mourns while heading back to Earth in the Ares III spacecraft. Little did they know that Watney had miraculously survived the storm and must survive on Mars with limited resources and perpetual loneliness.

I had a hard time getting into the book.

I admit that while I do like to read articles about NASA’s cool discoveries, I am by no means a space buff. Because of that, I was not as invested or as excited about the book as much as someone who was more interested in space would have been. But The Martian has been praised endlessly by critics (no wonder; it’s been made into a movie after all) and I couldn’t resist the urge to sample it myself. That being said, due to my lack of knowledge of space-travel, I will only be judging the book strictly through literary standards (writing, plot, etc), so don’t expect me to praise its status as “real-science scifi” because I have no idea how profoundly realistic it is.

For a debut novel, Weir did a swell job. It featured a really interesting story, the writing was easy to read through, and I understood the fundamentals of what was happening despite all the technical jargon going over my head. However, the novel definitely wasn’t the best I’ve ever read.

A lot of the problems I had while reading the book was due to the main character. Living on Mars with limited supplies is obviously very suspenseful, and the precarious situation Watney is in should have kept me engaged in the book. It didn’t. A large part of that had to do with Watney’s personality. Whenever a life or death event occurs, Watney makes incredibly immature jokes. While the jokes add an important comedic element contrasting the bleakness of the story, the bad timing really ruined the tension during much of the plot.

Furthermore, I wasn’t even as emotionally invested in Watney as I should have been. Without learning much of his personal life and motivations, his character came off a bit one-dimensional at times. For a book focused solely on his survival, this is a big problem. I grew bored while reading very quickly because of this (admittedly, I was also bored by the long explanations of the science behind how he manages to save himself – which really make up a good portion of the book).

That being said, there were moments when this novel really shined: times I really wanted Watney and the other characters to succeed. However, those moments were few and far between. I remained apathetic for most pages and the only thing that really kept me reading was curiosity for whether or not Watney will survive.

Do I recommend you to read The Martian? If you are into space, definitely. If you don’t mind simplistic language mixed with scientific jargon, and good ol’ poop humor, give the book a whirl. But if you’re looking for character development and something more substantial, this is not the book for you.

Find this book in our catalog: The Martian