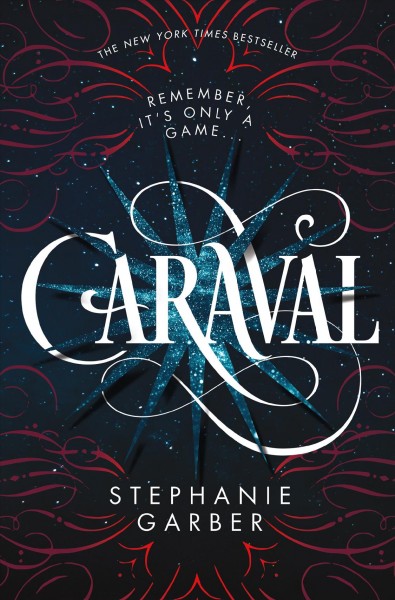 Summary: Scarlett Dragna has never left the tiny island where she and her sister, Tella, live with their powerful, and cruel, father. Now Scarlett’s father has arranged a marriage for her, and Scarlett thinks her dreams of seeing Caraval—the faraway, once-a-year performance where the audience participates in the show—are over.
But this year, Scarlett’s long-dreamt-of invitation finally arrives. With the help of a mysterious sailor, Tella whisks Scarlett away to the show. Only, as soon as they arrive, Tella is kidnapped by Caraval’s mastermind organizer, Legend. It turns out that this season’s Caraval revolves around Tella, and whoever finds her first is the winner.
Scarlett has been told that everything that happens during Caraval is only an elaborate performance. Nevertheless she becomes enmeshed in a game of love, heartbreak, and magic. And whether Caraval is real or not, Scarlett must find Tella before the five nights of the game are over or a dangerous domino effect of consequences will be set off, and her beloved sister will disappear forever.
Welcome, welcome to Caraval…beware of getting swept too far away. – Goodreads

Caraval by Stephanie Garber was the YA Book Club’s much enjoyed fantasy novel this October. Caraval follows the themes of magic, illusion, betrayal, and obsession. To the book club, the novel seemed to be derived from multiple different stories, as we saw a bit of Alice in Wonderland and The Wizard of Oz in there, but it still has its own touches. The creative world of Caraval is extremely well written, as it does not fall into the norm of fantasy YA books… for the most part. The moment we opened the book, we became just as lost in it as the characters inside, making the book a refreshing and fun read compared to what we’re used to. A member summarized the book, saying “it’s not what you think it is, but it’s exactly what you think it is.” We were left wondering thoughout, as the first books ins series often leave you. We wanted to know more about their family, the “magic,” and we would’ve liked to get to know some of the minor characters a bit more. All of us would actually be curious to see how this book would be turned into a movie, and hope to get some answers while reading the second book in the series. If you enjoyed Caraval, you will probably enjoy The Night Circus by Erin Morgenstern and Ready Player One by Ernest Cline. The overall rating is a solid 4.4 out of 5.

Find this book in our catalog: Caraval