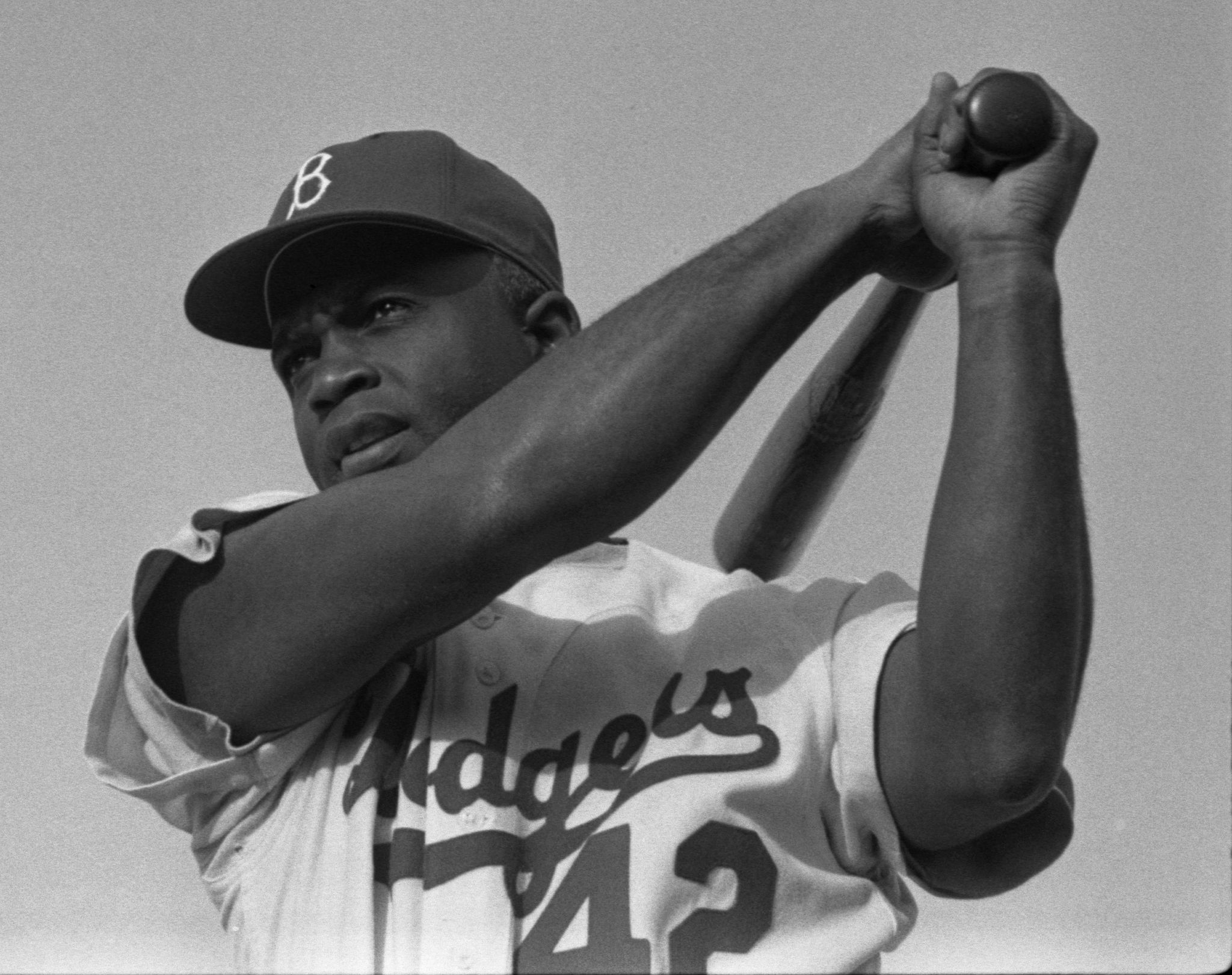 February is Black History Month, a time to recognize and learn more about African-American history and the remarkable achievements of many African Americans. It’s also a great reminder to explore and learn more about the many diverse peoples who have contributed to the history of America all year round! Pasadena has a rich African American history in general, but one of our most well-known citizens was Jackie Robinson, the first African American to break the color barrier and integrate major league baseball in 1947. African Americans had a long and storied history in baseball even before Jackie Robinson was signed to the Dodgers. In celebration of that history we’ve put together some resources to help you learn more about the early days of baseball including the Negro Leagues and the struggle for integration in the major leagues.

To learn more about this topic and discuss it with others, please join us for a screening of the documentary, Only the Ball Was White, about the legendary players of the Negro Leagues, on Saturday, February 11 at La Pintoresca Branch Library from 2-4 p.m., and visit La Pintoresca any time this month to see their exhibits of photographs and artwork celebrating the Negro Leagues.

Southern League: A True Story of Baseball, Civil Rights, and the Deep South’s Most Compelling Pennant Race by Larry Colton

Anybody who is familiar with the Civil Rights movement knows that 1964 was a pivotal year. And in Birmingham, Alabama – perhaps the epicenter of racial conflict – the Barons amazingly started their season with an integrated team.

Johnny “Blue Moon” Odom, a talented pitcher and Tommie Reynolds, an outfielder – both young black ballplayers with dreams of playing someday in the big leagues, along with Bert Campaneris, a dark-skinned shortstop from Cuba, all found themselves in this simmering cauldron of a minor league town, all playing for Heywood Sullivan, a white former major leaguer who grew up just down the road in Dothan, Alabama.

Colton traces the entire season, writing about the extraordinary relationships among these players with Sullivan, and Colton tells their story by capturing the essence of Birmingham and its citizens during this tumultuous year.

More than a story about baseball, this is a true accounting of life in a different time and clearly a different place. Seventeen years after Jackie Robinson had broken the color line in the major leagues, Birmingham was exploding in race riots….and now, they were going to have their very first integrated sports team. This is a story that has never been told.

World War II had just ended. Democracy had triumphed. Now Americans were beginning to press for justice on the home front–and Jackie Robinson had a chance to lead the way. He was an unlikely hero. He had little experience in organized baseball, his swing was far from graceful, and he was assigned to play a position he had never tried before. But the biggest concern was his temper–Robinson was an angry man who played aggressively. In order to succeed he would have to control himself in the face of what promised to be a brutal assault by opponents of integration. Drawing on interviews with surviving players, sportswriters, and eyewitnesses, as well as newly discovered material from archives around the country, Jonathan Eig presents a fresh portrait of a ferocious competitor who embodied integration’s promise and helped launch the modern civil-rights era.

Before Jackie Robinson integrated major league baseball in 1947, black and white ballplayers had been playing against one another for decades—even, on rare occasions, playing with each other. Interracial contests took place during the off-season, when major leaguers and Negro Leaguers alike fattened their wallets by playing exhibitions in cities and towns across America. These barnstorming tours reached new heights, however, when Satchel Paige and other African-American stars took on white teams headlined by the irrepressible Dizzy Dean. Lippy and funny, a born showman, the native Arkansan saw no reason why he shouldn’t pitch against Negro Leaguers. Paige, who feared no one and chased a buck harder than any player alive, instantly recognized the box-office appeal of competing against Dizzy Dean’s “All-Stars.” Paige and Dean both featured soaring leg kicks and loved to mimic each other’s style to amuse fans. Skin color aside, the dirt-poor Southern pitchers had much in common.

Historian Timothy M. Gay has unearthed long-forgotten exhibitions where Paige and Dean dueled, and he tells the story of their pioneering escapades in this engaging book. Long before they ever heard of Robinson or Larry Doby, baseball fans from Brooklyn to Enid, Oklahoma, watched black and white players battle on the same diamond. With such Hall of Fame teammates as Josh Gibson, Turkey Stearnes, Mule Suttles, Oscar Charleston, Cool Papa Bell, and Bullet Joe Rogan, Paige often had the upper hand against Diz. After arm troubles sidelined Dean, a new pitching phenom, Bob Feller—Rapid Robert—assembled his own teams to face Paige and other blackballers. By the time Paige became Feller’s teammate on the Cleveland Indians in 1948, a rookie at age forty-two, Satch and Feller had barnstormed against each other for more than a decade.

These often obscure contests helped hasten the end of Jim Crow baseball, paving the way for the game’s integration. Satchel Paige, Dizzy Dean, and Bob Feller never set out to make social history—but that’s precisely what happened. Tim Gay has brought this era to vivid and colorful life in a book that every baseball fan will embrace. Willie’s Boys: The 1948 Birmingham Black Barons, the Last Negro League World Series, and the Making of a Baseball Legend by John Klima

Baseball Hall of Famer Willie Mays is one of baseball’s endearing greats, a tremendously talented and charismatic center fielder who hit 660 career homeruns, collected 3,283 hits, knocked in 1,903 runs, won 12 Gold Glove Awards and appeared in 24 All-Star games. But before Mays was the “Say Hey Kid”, he was just a boy. Willie’s Boys is the story of his remarkable 1948 rookie season with the Negro American League’s Birmingham Black Barons, who took a risk on a raw but gifted 16-year-old and gave him the experience, confidence, and connections to escape Birmingham’s segregation, navigate baseball’s institutional racism, and sign with the New York Giants. Willie’s Boys offers a character-rich narrative of the apprenticeship Mays had at the hands of a diverse group of savvy veterans who taught him the ways of the game and the world. 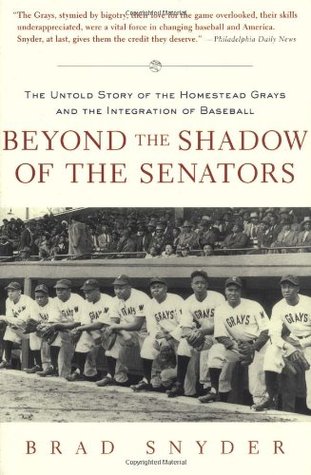 Beyond the Shadow of the Senators: The Untold Story of the Homestead Grays and the Integration of Baseball by Brad Snyder

In a time when the country was divided into black and white, our soldier boys battled against the evils in Europe, and war-weary Americans gathered around green fields to forget their troubles in the joys of our national pastime, the greatest baseball dynasty you’ve probably never heard of electrified the game and set an unstoppable revolution in motion. So begins the fascinating and often surprising story of the Homestead Grays, the Negro League’s most successful franchise, and how the fight to integrate baseball began not in Brooklyn with Jackie Robinson but in our nation’s capital.

During the first half of the twentieth century, Washington, D.C., was a segregated Southern town. Black and white Washingtonians lived in separate worlds–until those worlds collided at Griffith Stadium. Standing in the heart of a thriving black district, the park played host to the white Washington Senators and, when the Senators were out of town, the Homestead Grays. There, the best team in the Negro Leagues reigned victorious on the same field where one of the worst teams in the all-white majors struck out again and again. Although white fans never caught on, tens of thousands of loyal black fans flocked to watch the great Grays. On those sun-bright stadium afternoons, the wall of segregation fell away; the fans sat wherever they wanted–and, together with their number-one team and a host of heroes, they transformed our nation’s capital into the front lines of the campaign to integrate major-league baseball.

Long before blacks gained entrance into major league baseball, some of the greatest athletes ever to play the game were performing remarkable feats in the Negro Leagues. Fans today look back on the legendary Negro Leagues with reverence and awe, yet there has been woefully little visual documentation of the leagues’ history. This treasure trove of images by Ernest Withers, the unofficial team photographer for the Memphis Red Sox, captures the peak of Negro League action through the years of groundbreaking integration, as well as the community in which black baseball was played.

Satchel Paige, Jackie Robinson, and Hank Aaron are among the superstars portrayed in 150 photographs, reproduced in stunning duotone plates, introduced by baseball legend Willie Mays, and accompanied by an informative text by Daniel Wolff. From pictures of Indianapolis clown King Tut, the baseball equivalent of a Harlem Globetrotter, and pitcher Charley Pride, who went on to become a country/western singing star, to shots of visiting celebrities and ballplayers relaxing at local clubs, these astonishing photographs evoke a long-gone era and form an essential visual archive of a near-mythological aspect of baseball history.

History was made in 1947, when Jackie Robinson broke the professional baseball race barrier to become the first African American MLB player of the modern era. 42 tells the life story of Robinson and his history-making signing with the Brooklyn Dodgers under the guidance of team executive Branch Rickey. Tells of the story of Jack Roosevelt Robinson, a sharecropper’s son who elevated an entire race and country when he broke Major League Baseball’s color barrier in 1947. The film illuminates Robinson’s place as a leader and icon of the civil rights movement whose exemplary life and aspirational message of equality continues to inspire generations of Americans. Includes interviews with family members and rarely-seen photographs and film footage. Pride and Perseverance: The Story of the Negro Leagues

The history of the Negro Leagues is often a forgotten part of baseball history, and despite its popularity and wealth of talent was not well documented. The film sheds light on this period and shows how it laid the groundwork for today’s African-American players in Major League Baseball. Includes footage from the 1920s through the 1950s.