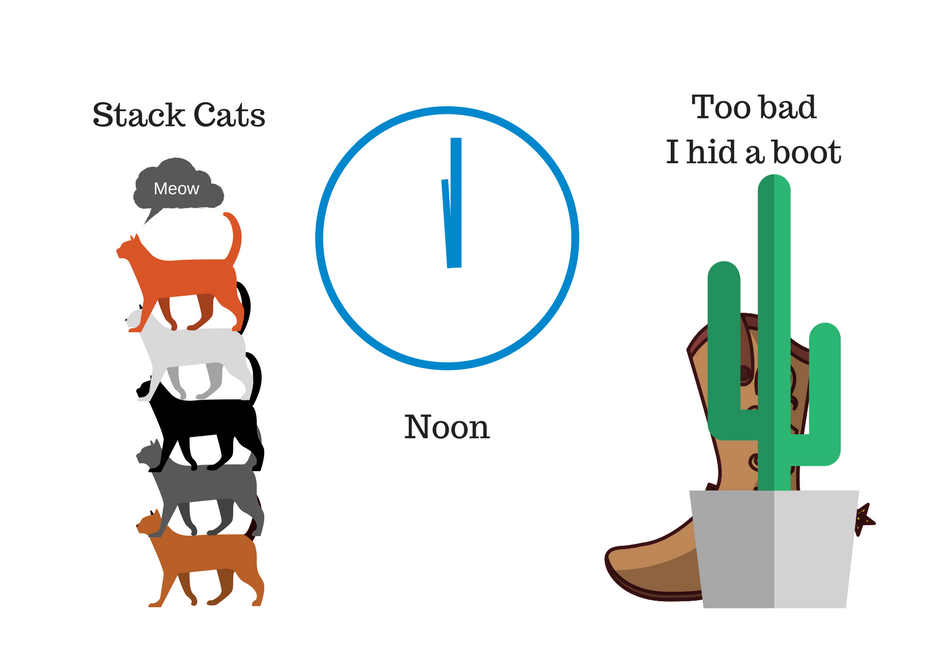 Every day this week, from Monday, 7/10/17, through Sunday, 7/16/17, the date (written with a 2-digit year) is a palindrome; in other words, it reads the same backwards as forwards. In honor of the occasion, we’ve got some titles about wordplay, puzzles, and games to tickle the brain.

Tyrannosaurus Lex: The Marvelous Book of Palindromes, Anagrams, and Other Delightful and Outrageous Wordplay by Rod L. Evans 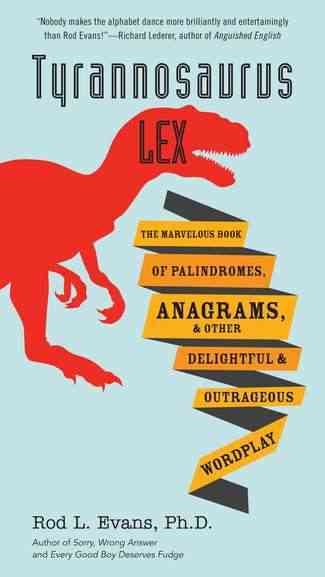 Welcome to the Weird and Wonderful World of Words!

Tyrannosaurus Lex is your guide to the intriguing world of logology—the pursuit of word puzzles or puzzling words—featuring:
•A wealth of witty anagrams, palindromes, and puns
•Clever paraprosdokians: sentences with surprising endings (“I’ve had a perfectly wonderful evening, but this wasn’t it.”—Groucho Marx)
•Fascinating oronyms: a pair of phrases that differ in meaning and spelling, yet share a similar pronunciation (“The stuffy nose can lead to problems” versus “The stuff he knows can lead to problems.”)
•Peculiar oxymora: words or phrases that are self-contradictory (Jumbo shrimp! Guest host! Gold silverware!)

So sit back and get ready to learn about everything from antigrams and aptanagrams to kangaroo words and phantonyms. You’ll never look at language the same again!

For Scrabble fans—and they are everywhere, young and old, male and female—this walk down memory lane with the former National Scrabble Association (NSA) executive director is informative, funny, anecdotal, and bittersweet, for in the end, Hasbro shut the association’s doors, giving its activities to those who merely love the game (and don’t get paid for working with it), and Williams stepped out, in 2013. Here word-geek Williams offers a tell-all of the good old days of TV appearances, innovations, celebrity call-outs (Jack Black is a fan) but, mainly, of establishing national, international, and school-based Scrabble tournaments. Many found their métiers pushing those tiles into words. Playing well involves math skills, anagrammatic abilities, and—of course—a love of language, old terms as well as new. Scrabble will continue, however, without the NSA and its savvy positioning of the board game within a changing world, and aficionados will treasure this book for its appendixes: “offensive” words; short Q, J, X, and Z words; “Important Vowel Dumps”; and more. Since the game of Scrabble was created in the 1940s, more than 100 million sets have been sold in 121 countries. Because Scrabble requires a unique combination of luck, strategy, and word skills, even “friendly” games can end up in heated battles for “bragging rights.” Competitive Scrabble, though, as Fatsis makes clear, is fought at a much higher level of intensity. For example, its rulebook runs 23 pages and includes stipulations for bathroom breaks. Fatsis is a regular commentator for NPR’s All Things Considered, and his knowledgeable coverage of sports for the Wall Street Journal is refreshingly entertaining. Several years ago, in search of a story idea, Fatsis challenged the director of the National Scrabble Association to a match. Fatsis won and was hooked. He now describes his own intoxicating rise through the ranks of tournament Scrabble players as he achieves “expert” status. At the same time, Fatsis colorfully portrays the eccentrics and obsessive characters that inhabit the quirky “Scrabbler” subculture. 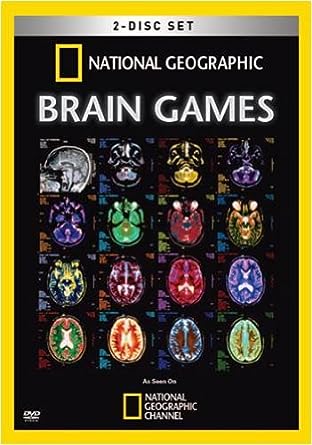 National Geographic’s groundbreaking series provides a fascinating window into the inner workings of the brain as never before. Through interactive experiments and tricks, Brain Games reveals how our brains create the illusion of a seamless reality. As these revealing experiments provide a unique view into our brains, the world’s leading experts explain how and why these tests work.

Wordplay: Ambigrams and Reflections on the Art of Ambigrams by John Langdon It would be interesting to know,” Martin Gardner writes in his foreword, “when it was discovered that certain words are unchanged when inverted or reflected… It is easy to see that WOW is MOM upside down, but who would have guessed that an enormous variety of words and phrases with no symmetry when printed could be shaped so that they were the same when inverted or reflected?”

In this book John Langdon shows us how we can expand our understanding of terms and concepts by looking at ambigrams words that were designed to read upside down, back to front, or in the mirror as well as left to right. (Turn the title upside down.) He not only presents the reader with a number of strikingly beautiful and arresting ambigrams but also shows how the very shape of the letters can change our idea of the word itself and its meaning. He even disarmingly demonstrates how one goes about making an ambigram. The reader should be warned, however, that it is not quite as easy as it looks. 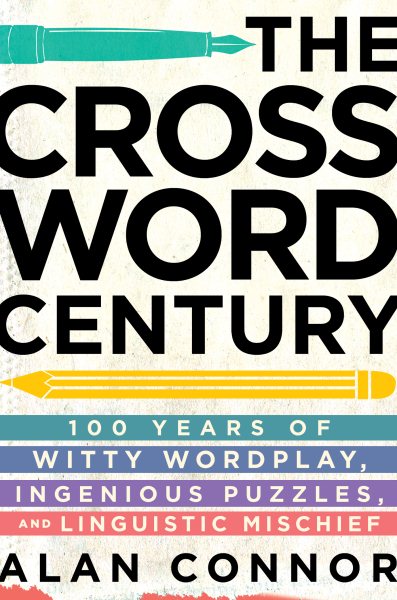 The puzzle columnist for the Guardian,Connorcelebrates the first 100 years of the ubiquitous black-and-white pencil game with a lighthearted overview. From the crossword’s first appearance in the 1913 New York World to Wordplay, the 2006 documentary about the annual American crossword solving contest, each bite-size chapter covers a different aspect of the pastime with emphasis on 20th-century influences such as from caricaturist Al Hirschfeld, humorist P.G. Wodehouse, and lyricist Stephen Sondheim. The global fever took off in 1924 with publication of the first puzzle collection by a fledgling publishing house now known as Simon & Schuster. While the crossword changes shape from country to country, the passion for solving remains a constant. Connor credits the crossword’s universal popularity to the fact that the inventor didn’t copyright the idea, which would have entailed royalties. Those who resort to looking up answers will especially appreciate Connor’s chapter on cheating, in which he opines, “there’re no Marquess of Queensberry rules” in this arena, so no rules can be broken.

Away With Words: An Irreverent Tour Through the World of Pun Competitions by Joe Berkowitz Berkowitz begins this nonfiction adventure through the sludge of semantics with a disclaimer: he figures readers will get annoyed with his book. He expects them to groan with frustration. He predicts his book will fly angrily across a few living rooms. The book is, after all, a penetrating exposé of American pun competitions. Despite Berkowitz’s ominous warning, Away with Words is an enjoyable read. Taking a Mary Roach approach to investigating the world of wordplay, he attends the major pun conferences, befriends the pun superstars, and even visits the writers’ rooms of TV’s “punniest” shows—Bob’s Burgers and @midnight. The book calls for a close read; solving the phonetic tricks without hearing them aloud takes time. Overall, it’s time well spent. Readers will leave having enjoyed a hearty belly laugh over Berkowitz’s natural skepticism of the “sport” and also with a pocketful of fresh puns to whip out around the water cooler.

A Word a Day: A Romp Through Some of the Most Unusual and Intriguing Words in English by Anu Garg; with Stuti Garg Written by the founder of the wildly popular A Word A Day Web site (www.wordsmith.org), this collection of unusual, obscure, and exotic English words will delight writers, scholars, crossword puzzlers, and word buffs of every ilk. The words are grouped in intriguing categories that range from “”Portmanteaux”” to “”Words That Make the Spell-Checker Ineffective.”” each entry includes a concise definition, etymology, and usage example-and many feature fascinating and hilarious commentaries by A Word A Day subscribers and the authors.

This one’s technically a children’s picture book, but worth reading at any age for its warmth, punchy illustrations,  extreme punniness, and its touching lesson in identity and self-discovery.

From the dynamic team that brought you Duck! Rabbit! (2009) comes this introduction to the most exuberant punctuation mark of all: the exclamation point. At first, !, a round circle with a face, doesn’t like standing out in a crowd; in a line-up of seven smiling faces, which look like period marks, he’s the only one with a line above his head. ! tries clever ways to fit in (flipping himself upside down, thereby squashing his tail) and even thinks about running away, until he meets a formidable force: the question mark. After a barrage of questions from ? (“Do you like frogs? Can you hula-hoop?”), ! finds his voice and tells him to “STOP!” From there, !’s confidence begins to grow and, soon, there’s no stopping his unbridled joy. The spare, clever illustrations—all round, black-outlined punctuation marks with faces—are set on the kind of thick-lined paper kindergarteners use, and the overall design effect is lovely. The text is similarly simple, but a change in the size and color of the font signifies important moments. With the celebrating-your-strengths angle, fun grammar lesson, and many classroom tie-in possibilities, this picture book deserves a !!!

If your taste for word fun is of the puzzle variety, here’s a final title to try in a format which may be new: a digital magazine. You can checkout, read, print and browse back issues of Games World of Puzzles  (“For creative minds at play”) and play with words, numbers and puzzles of all sorts to your heart’s content. Games World of Puzzles is loaded with all kinds of puzzles by top constructors as well as fascinating articles, game reviews, upcoming events, a contest in every issue, and much more. It’s the perfect magazine for all puzzle fans and gamers!

*No due date, no limit on total magazines you can check out, and no limit to the number of users who can have a specific issue checked out simultaneously!