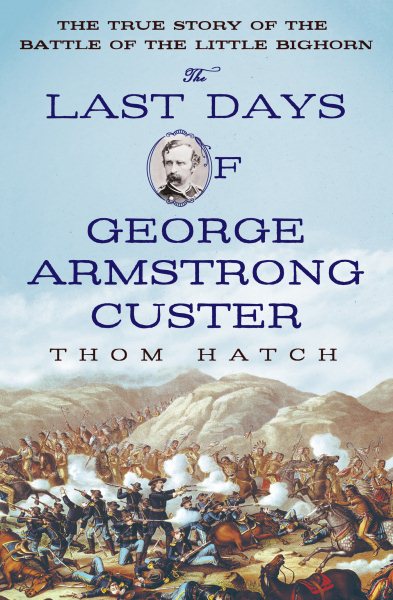 The Last Days of George Armstrong Custer: The True Story of the Battle of the Little Bighorn by Thom Hatch

The Last Days of George Armstrong Custer, by Thom Hatch, is an intriguing and informative analysis of the Little Bighorn campaign. The author is a modern military veteran who has also written about Custer’s Civil War actions and about the American West.

While clearly pro-Custer, Hatch makes a solid case that the disaster at the Little Bighorn was not entirely Custer’s fault. Custer could be accused of overconfidence, but in fact his actions suggest that he was following a plan which had been successful on previous occasions, and that his commander had given him the discretion to make things up as he went along. Thus Hatch suggests, and makes a good case for, other reasons for the disaster.

What makes this a solid study is Hatch’s analysis of Custer’s earlier career, and the ways in which he was guided toward the final disaster. He presents a solid case against some of the things of which Custer has been accused, and suggests a possible battle plan that would explain Custer’s actions and orders, and which might have succeeded if carried out by his subordinates.

The primary weakness of this book is the editing, which allowed some confusing paragraphs [I had to look at another source in order to make sense of one of them, related to Custer’s wartime rank] and which also allowed some off-topic ranting by the author. While I actually agreed with some of the points he made during these rants, they were still a distraction from the story being told, and should have been revised in editing. Hatch may have allowed his personal hero-worship of Custer to color his reasoning on Custer’s actual flaws. His staunch defense of military actions and the illegality of disobeying even questionable orders quickly leads to the “I was only following orders” defense of improper actions. Hatch shows that Custer was not guilty of the worst charges against him, but simply glosses over lesser charges, like the gold mine his soldiers established on Sioux land, or the interesting financial dealings in which he was involved.

Overall, if you are interested in a serious study of Custer, or an understanding of what happened at the Little Bighorn in a bigger military and political context, then this book will be very rewarding.