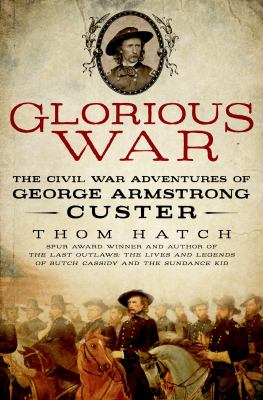 This book is a detailed study of the Civil War career of Custer. During that period, his rapid rise to generalship was stunning, and his adventures throughout the war gained him a reputation for both skill and outrageous bravery that lasted until his final adventure at the Little Bighorn. Hatch solidly documents his contentions that Custer was a results-based commander, leading by example when that was needed, and loved by his men. Custer’s actions at Gettysburg are especially highlighted, as these are sometimes overlooked, but also his involvement with the other major cavalry actions of the war from that point on are key to Hatch’s contentions that Custer was an excellent tactical commander in the field. His men would follow him to hell and back, but unlike some other officers, he really did try to make it a two-way trip. He rarely made mistakes which wasted the lives of his men, but was willing to deal with the reality that there would be casualties in most military actions. Custer’s idol, George McClellan, often paralyzed himself with a desire to avoid casualties at all costs. Hatch’s condemnation of Judson Kilpatrick by comparison mirrors common attitudes about a man who earned the nickname “Kill Cavalry” from his own men. Oddly, Custer is the moderate of the bunch, but his personal bravery and willingness to take risks carried him and his men through dangers with losses, but rarely heavy ones.

The political side of the military is examined in the story as well, and here Hatch sometimes editorializes against the common stream of historical writing. He comments in passing that McClellan was removed from command for political reasons, when most other writers feel that it was because of his paralysis whenever action was needed.  When Custer is not the focus, a few stray errors creep in, from either Hatch or his editor. For example, the list of Lincoln’s opponents in the election of 1860 is weirdly incorrect. Still, the book is very much worth reading for anyone interested in Custer himself, or the cavalry battles of the Civil War.

Previous Post: To Infinity and Beyond: 6 Books about Space
Next Post: Missing Mad Men?: Six Books to Fill the Mad Men Shaped Hole in your Life