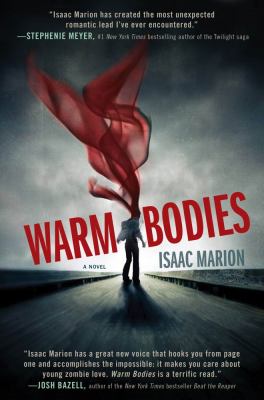 R misses many things, but the thing his misses the most is his own name. After being transformed into a zombie, the hustle and bustle of his former life has changed, significantly, and the only thing he looks forward to is standing still and looking at the desolate world. R lives in an abandoned hanger of an airport with his good friend M. Just like R, M is still in the early stages of decay and they have the ability to moan and groan and to form a zombie language. Inside of his head, R is alive and filled with ideas and coherent speech, but his body won’t allow him to say the things he want to say. Although being a zombie is pretty easy, the days just get longer and longer. Another downside to being a zombie, other than not being able to talk, read, or remember names, is eating. R doesn’t like hearing the cries and the pain that comes from his meal, but the only thing he takes pleasure in is eating the brains of his prey; by eating the brains, he can absorb the memories of that person. Although R has established his ranks in the zombie community (he has a wife and two kids), something is still missing. On a routine hunt, something inside R makes him ravenous and when he eats the brain of a young man named Perry, R has devoured everything that makes Perry who he is. After re-living Perry’s memories, the ones that stick out the most are of Julie. Julie was Perry’s everything and now that he is a part of R, R chooses to protect her.  After saving her from his horde of hungry zombies, Julie actually follows R and discovers that zombies are not what them seem; at least this one tries to talk to her, has a great collection of Frank Sinatra LP’s, and is actively protecting her. The question that nags at her is “why?” Why is R protecting a girl he doesn’t know, but is attracted to because of the brain he consumed? Lastly, something about him is changing and he doesn’t know why.

The writing in this book is just brilliant! I will confess that I did see the movie before reading the book, and I am pretty impressed with how true the film is to the book. However, I am not here to review the movie, I am here to talk about the book. Warm Bodies is more than a story about a boy who meets a girl. This story is about self-discovery and, in R’s case, recovering everything he has lost. Just like John Gardner’s Grendel, readers will get a unique insight into the mind of the undead and identify with it in so many ways. Although zombies are nothing more than an urban legend, the question is, if they did exist, would they be like R? What I find entertaining about this story is that there is a very thin line between the living and the dead; although R is dead, he takes it upon himself to stop and observe the life around him. For most living people, we are too busy to even notice the landscape that surrounds us or if your co-worker is going through a hard time.  At some point in time, R was a living person, like we are, but, now that he is dead, he has a huge appreciation for everything around him including the ability to speak. R wants to communicate so bad, but his body won’t let him. I loved it when he said that being a zombie was easy, but, being human, is never easy. As for Julie, who is the complete opposite of R (besides a pulse), she has no idea what to think or how to understand why a zombie would protect her. The more she gets to know R, the more she realizes that he is not just a zombie, but a friend and confidant. When R risks his undead existence to love Julie, it will not only have readers cheering, but melt the hearts of cynical readers.