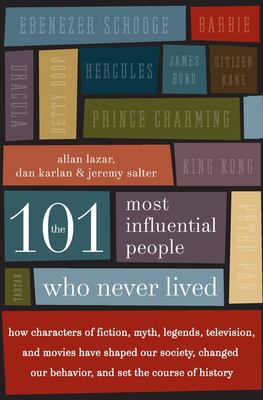 The 101 Most Influential People Who Never Lived by Allan Lazar, Dan Karlen, and Jeremy Salter

The authors present the 101 fictional characters that have had the most influence on our society, behavior, and ultimately our history. They explain in detail their process of inclusion on and elimination from the list. They also readily acknowledge there is room for disagreement in not only who did or did not make the list, but in how the characters were ranked on the list. They point out that they left many popular characters off the list, because popular does not always translate into influential.

The idea for this book sprang from another book – The 100: A Ranking of the Most Influential Persons in History by Michael Hart.

Near the beginning of the book, the authors have listed the entire 101 characters in rank order. Prior to reading the entire book, you might find yourself questioning some of the rankings just as I had. However, after I finished the book and understood the authors’ methodology and reasoning, I no longer disagreed with as many of the ranking decisions the authors made. Keep in mind that the authors tried to rank each character’s overall influence, not the influence a particular character had on the authors’ personal lives.

The book also includes an appendix, which is an alphabetical list of twenty “also-rans and near misses.” Throughout the book, in the category/chapter introductions and the interludes, the reasons why some characters were left off the list are discussed.

I enjoyed the humor the authors used throughout the book, some of which is very obvious and some is much more subtle, and I learned a lot from this book, including some things I was surprised I did not already know. (How on earth did I not know that Dashiell Hammett was a victim of the Hollywood blacklist?!) Connections between characters and the events they arose from and/or affected also became clearer to me. While some readers may not draw the same conclusions on whether a given character’s influence was good or bad, I found myself sharing many of the same opinions as the authors. I was actually relieved in some cases to discover, “Hey! I’m not the only person who thinks this character send a good/bad message.” I’m talking to you Cinderella! If you are a history nerd and/or trivia junkie like I am, I really believe you will enjoy this book.