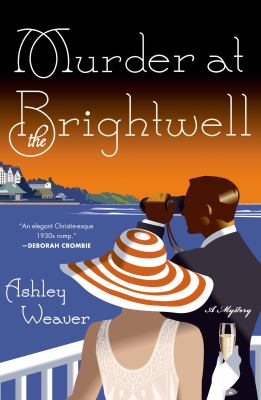 Murder at the Brightwell by Ashley Weaver

Wealthy, young Amory Ames seems like she’s living a charmed life, but the fact is that Milo, her playboy husband spends most of his time away from home making quite a reputation for himself. Amory thinks she has resigned herself to the current state of her life, but when her ex-fiancée Gil comes suddenly back into her life looking for help, she finds that she can’t resist. She leaves for a seaside vacation with him and several of his friends, ostensibly to help him persuade his sister not to marry Rupert, a young man who reminds her of Milo when they first met. The vacation takes a dark turn however when Rupert is found murdered and Gil becomes the primary suspect. Convinced of his innocence, Amory becomes determined to find the real killer.  She is assisted in this pursuit by Milo when he unexpectedly shows up at the hotel.  As Amory tries to sort out her feelings for both Milo and Gil, she must also find the killer before they decide to come after her next!

Murder at the Brightwell is a thoroughly charming historical mystery.  The setup gives it a similar feel to an Agatha Christie type house party mystery, since the guests are all trapped at the hotel for nearly the whole duration of the book. Within this limited scope however Weaver creates a spot-on 1930s British uppercrust setting that is so much fun to spend time in.  The mystery itself is engaging enough to hold down the plot, but the real delight is in getting to know Amory and Milo and discovering them as individuals and seeing their relationship evolve.  While a few of the secondary characters may come off a bit flat, these two main characters more than make up for that with their witty repartee.  Amory is a compelling character, clearly regretting some of her choices, but also unwilling to be crushed by them.  It is interesting to watch her views of Milo change and grow as they begin to work together to solve the case. While he starts out as a shallow playboy, as Amory spends more time with him, we see him slowly becomes a much more complex character. While the high points of this book are definitely their scenes together, they have a Nick and Nora-like vibe to their interactions, Amory is more than strong enough to carry the narrative on her own when Milo is out of the picture. This is a great one for fans of historical mysteries such as those of Charles Todd or for people who like just a hint of a relationship in their mystery a la Julia Spencer-Fleming.