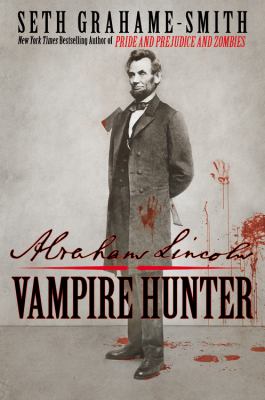 What if every biography about Abraham Lincoln was missing a dark part of his life? What if the greatest president of the United States not only freed us from the ideology of slavery, but from the human race becoming a slave race itself? Although we know that Abraham Lincoln was a humble country boy who overcame his obstacles to become president, what if he was a sent by God to free us from the devil himself? Let’s face it: Abraham Lincoln was, and still is, the greatest vampire slayer in history. When he lost his mother to “milk” sickness, Abe learned that it was not disease that killed her, but a vampire. Unable to live with the idea that vampires were free to roam the Earth to feed off anyone, he dedicated his life to destroying this evil. However, what we didn’t realize is that his teacher and greatest ally is a vampire himself. What the history books don’t tell us is that his friend, Henry Sturges, a vampire and mentor, is the one who taught him that not every vampire is a ruthless monster. In fact, there are vampires who wish to remain in the shadows where peace and coexistence prevail. When Abraham witnesses a slave auction for the first time, not only does he see the horrors of this institution, he notices that among the audience members are vampires. Vampires that have the ability to purchase their prey without having to come out at night and without worrying about people noticing. The worst part is that humans have actually made a pact with the vampires so everyone can profit. With Henry’s help, and that of the infamous Edgar Allan Poe, Lincoln has to make a decision to fight the good fight or live a normal life. Abe chooses to live a life with his wife and sons, and he will fight his battle against slavery in office and hang up his ax for good. However, when his rival, Stephen Douglas, changes his position on slavery and promotes slavery in the new, free territories, Lincoln decides to come out of “retirement” and take a stand once and for all. The rest we know is “history,” but is it really?

In this delightful spin on the life of Abraham Lincoln, Seth Grahame-Smith brings even more awesomeness to the life and legacy of Honest Abe. By intertwining the facts of Lincoln’s life with that of his “secret” diaries, readers get to see a different side of a man who did everything he could to conceal his personal life. Although the vampire slayer gig may be fiction, I think it adds depth to the man who suffered and rose above it all. What’s even more fascinating is that by casting this man as a strong, nimble, and fierce warrior, readers have the opportunity to challenge the facts that said Lincoln was a humble, gawky, and freakishly tall man who couldn’t find pants that fit. Most will wonder if Lincoln, was in fact, the opposite of his persona. In other words, if Lincoln was presented the opportunity to show the world the fire that was in his eyes when he spoke, could he have done so much more? I will admit that I have a bit of Lincoln obsession because we don’t really know much about this private man other than what historians, biographers, friends, and acquaintances know or have told over the years. In many ways, I really, really want to believe that Lincoln was this all powerful superhero who was denied his full potential because this world wasn’t ready for him. After reading this amazing story, readers will be itching to read Lincoln biographies or do a little research of their own. As a reader, I am not only impressed with the twist on Lincoln’s life, but also by the juxtaposition of two very similar, yet very different examples of slavery. For Abraham Lincoln, not only did he want to free his fellow human beings from the bondage of slavery, but also to protect the human race from becoming enslaved by vampires. Personally, I like the fact that I am not being harvested for my blood to feed a merciless race of otherworldly beings. Furthermore, I love that I live in a country that protects and upholds my inalienable right to live a life of liberty, freedom, and happiness. There is a phrase that says “evil begets evil” and if Lincoln had not put an end to slavery then who knows where we would be now.