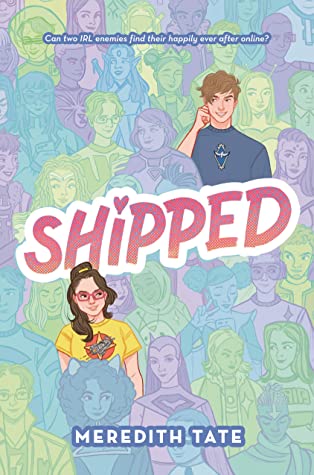 Wesley Clarke and Stella Greene are both desperate. They both need the coveted valedictorian prize (a full ride scholarship to a school of your choosing) for different reasons, and neither of them are willing to give it up. They’ve been rivals since the day they met in highschool, constantly exchanging horrible pranks and insults. It gets even worse when they’re partnered up for a school project, having to bear the other’s presence for three months. Both have everything to lose, and neither is willing to fail. Little do they know, under aliases online, they’ve already become friends. They plan to meet each other in real life at SciCon donning their best cosplays, and await the day they finally get to see each other in-person. How will they take to realizing that the person they’ve been chatting with for months is their worst enemy? As tensions rise at school, with finals and SciCon both approaching, will they still be able to hate each other by the end of the year?

Shipped has met and exceeded my standards for an enemies to lovers trope, packed with everything you could think of. I love how the author incorporated a fandom inside the book itself and how it switched perspectives between Wesley and Stella with each chapter. The main characters are both sci-fi dorks and relate to each other in ways they don’t even know the depths of, their online and in person interactions making it such a fun read. This book is definitely a slow burn; there were so many times I thought they would figure it out but then they turned in the exact opposite direction, making me scream more times than I can count. The author makes it so that you can’t choose only one of them to root for, and they both undergo character development as you continue reading. I was begging to know who would get valedictorian and what would happen when they finally met in real life. In addition, the way their feelings developed was the most adorable thing to read. The ending was executed in the most perfect, dorky way possible and I wouldn’t have it any other way. The characters are written very well and their feelings are displayed to feel raw and real. There was confusion, affection, resolution, and hatred; I loved every bit of it. There’s so much depth to the book, and it is all summed up as an absolutely amazing read.