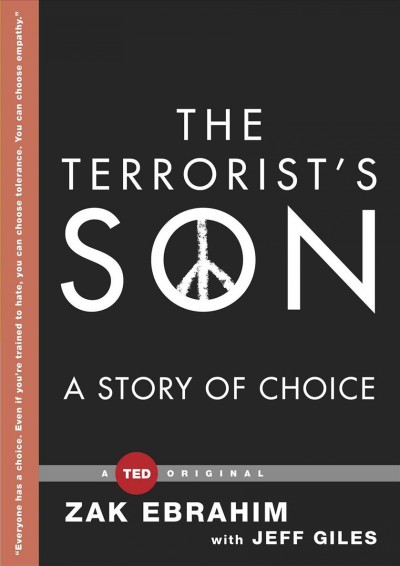 The Terrorist’s Son: A Story of Choice By Zak Ebrahim with Jeff Giles

In writing The Terrorist’s Son, Zak Ebrahim does not mince words. He writes, “My father was the first known Islamic jihadist to take a life on American soil. He worked with the support of a terrorist cell overseas that would ultimately call itself Al-Qaeda.” Ebrahim was a seven-year-old Ninja Turtle enthusiast who was learning to tie his shoes when his father, El-Sayyid Nosair, killed the controversial Rabbi Meir Kahane, founder of the Jewish Defense League. The assassination catalyzed a nightmarish chain of events for young Ebrahim and his family: “It tipped us into a life of death threats and media harassment, nomadic living and constant poverty, a thousand ‘fresh starts’ that almost always led to something worse.” The family was left in even worse circumstances when Nosair was found complicit in planning (from his prison cell) the 1993 bombing of the World Trade Center. In the aftermath, Ebrahim endured not only bullying, poverty, and the resentment of others, but also the barbarity of a cruel stepfather whom his mother had turned to in desperation. This man “punishes my brother and me for every infraction, whether real or imagined. He uses his fists, his belt, a hanger.” Despite the tribulations of his childhood and adolescence, however, Ebrahim emerged as an opponent of bigotry and an advocate for nonviolence.
Throughout this narrative, I was struck by the candor of Ebrahim’s writing. His story was unique and fascinating, told from the perspective of someone who was raised to hate, and who turned instead to peace and tolerance. Shocking details revealed themselves continuously. For example, Ebrahim explains that in the days following his father’s assassination of Rabbi Kahane, his family lived off of donations from Nosair’s supporters. He writes, “…To many Muslims, my father is a hero and a martyr.” He also reveals a detail from the days leading up to his father’s trial, when $163,000 was donated for Nosair’s defense. Ebrahim’s relative “reaches out to Osama bin Laden, who contributes twenty thousand himself.” I was impressed by Ebrahim’s admirable rejection of bigotry and his devotion to peace. He relates how exposure to people from different backgrounds (especially during a summer job, which he describes with wonderful humor) led to his unbiased attitude. In Ebrahim’s words, “I’ve got incontrovertible proof that my father raised me on lies. Bigotry is stupid. It only works if you never walk out your door.” I highly recommend this concise, powerful book.
4.5 stars.