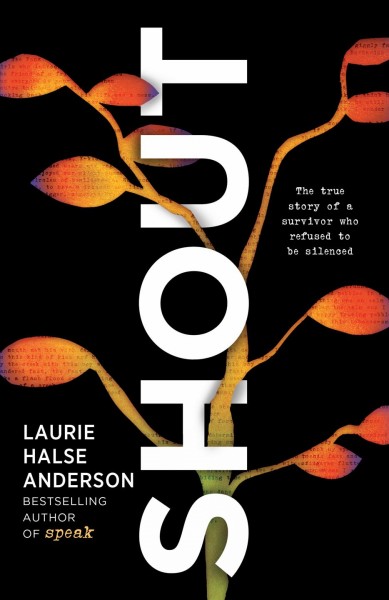 Shout: The True Story of a Survivor Who Refused to be Silenced By Laurie Halse Anderson

In the poem “emergency, in three acts”, Laurie Halse Anderson recounts her experience giving a speech at a New Jersey high school. In this scene, she “stands in the spotlight / owns the microphone / preaches facts about power / and bodies and sex and violence / speaks up, on fire.” After an intermission, she is about to speak to the second group of students, when suddenly “the fire alarm erupts / silencing me. / It is the only way Principal Principal / quaking in his shiny black shoes / either terrified of parents / or guilty as hell / can think to shut me up”. The principal tells Anderson that her words are “not appropriate” for his students because “those things don’t ever happen / at his school.” I mention this poem because it captures the essence of Shout, a memoir in verse that details Anderson’s experience of sexual assault at the age of thirteen and her subsequent journey of survival, authorship, and advocacy. The excerpt illustrates Anderson’s refusal to remain silent, despite cultural pressures to shun the topic of sexual violence.
From the financial and emotional struggles of her childhood (Anderson’s father, a preacher and World War II veteran, living with PTSD) to the bleak aftermath of her rape (a time of academic ambivalence and marijuana), to a life-changing period living in Denmark as an exchange student, Anderson’s youth forms the first portion of the book. The next portion is still autobiographical (mostly devoted to Anderson’s life after writing her bestseller Speak), but the scenes of Anderson’s life are interspersed with the stories of other survivors and commentary on topics including censorship, innocence, and forgiveness.
My favorite poems in this book were those describing Anderson’s experience as an exchange student in Denmark. These poems, I thought, were the most lyrically beautiful of the collection. In the poem “hvordan det begyndt / how it started”, Anderson writes of herself and her fellow students: “we walked to the village to buy stamps / and chocolate / sang through the late sunshine / on the endless summer nights.” Anderson’s poems exude raw emotion with great effect, and her exemplary resilience is apparent throughout her story. However, for pure literary merit, I prefer Anderson as a novelist. Her books Chains and Forge are wonderful for young readers. I still recommend this book as a powerful story of survival.
3.5 stars.