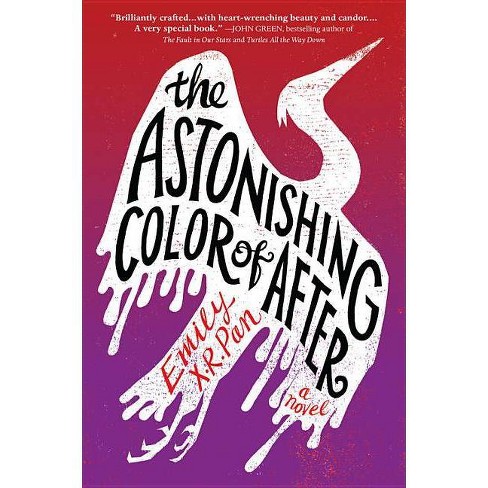 The Astonishing Color of After By Emily X. R. Pan

In The Astonishing Color of After, X. R. Pan crafts a story using nonconventional colors, such as fuchsia and alizarin crimson, to indicate the complex emotions Leigh is dealing with following her mother’s death. Leigh, the offspring of a Taiwanese mother and American father, already finds it difficult to not be labeled as “exotic” and “peculiar” because of her ethnic background. Her obsession with art further isolates her from her peers. Nevertheless, she has found a confidant in her close friend Axel. Yet, as to be expected, the transformative teenage years bring unprecedented changes and confusing emotions that chip away at their once solid friendship foundation.
As if her life isn’t hard enough with her father thinking that it is ludicrous for Leigh to be so ambitious about art instead of assuming a more “practical” career option, Leigh is suddenly convinced that her mother has metamorphosized into a bird. Despite the numerous details proving that these unordinary occurrences are not happening by whim, her father refuses to believe her.
Leigh deals with emotional turmoil as she tries to uphold her mother’s last wish of “I want you to remember.” Convinced that the striking pencil mark that crossed out this sentence on the suicide note is a sign to investigate further, Leigh ventures to Taiwan to try to reconstruct the broken pieces of her mother’s life. In the process, she removes the self-composed veneer that her mother often kept, revealing the true root of her depression and the conflict that led to her mother’s parents disowning her as their daughter.
X. R. Pan shines a light on the crippling effects the mental health disorders can have on an individual. In crafting this creative novel, she brings to question to what extent are medical diagnoses accurate descriptions of a person’s illness or if we should evaluate their history before eliminating their background as a trivial external factor. Leigh’s perspective is broadened when she realizes the many instances where her mother contemplated ending her life. The realization is difficult to accept, but necessary for Leigh to understand the self-blame that ultimately took control of her mother’s life. In addition to writing about mental health, X. R. Pan illustrates the complexities of family dynamics. She creatively illustrates the complications resulting from old family tensions and the effort that Leigh’s mother took in removing her Taiwanese background from existence. In telling this story. X. R. Pan shows the detrimental effects longstanding traditions and assumptions can have on filial relationships, especially when someone decides to go against the norm.
In spite of these challenges, X. R. Pan manages to keep the plot on an optimistic path, uncovering the story of Leigh’s family.
5 stars