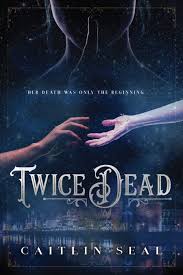 “Twice Dead”, a story by Caitlin Seal set in the fictional land of Belavine City, is about a girl named Naya who meets her untimely death within the first chapter while on a trading mission for her merchant father. However, she’s not about to kick the bucket just yet. Naya has been revived by a necromancer and brought back to life as a wraith. Wraiths don’t necessarily ‘live’— they don’t breathe, they have no pulse, and they have essentially nothing left to live for. But when Naya discovers that her father’s trade is not just goods, but secrets, she also becomes a spy in hopes of not being rejected by him. However, before Naya can conduct spy work, she must learn to exist as one of the undead without incident and also accept the craft of necromancy. I found this book to have a plot that was very hard to follow. It left me confused at several points, and I felt that some of the characters were not developed enough. Also, the story was somewhat predictable, as a few of the so-called “twists” left me feeling something like “Oh, okay. I was expecting that.” Overall, I would rate this debut of the “Necromancer’s Song” series at 2.5 stars.