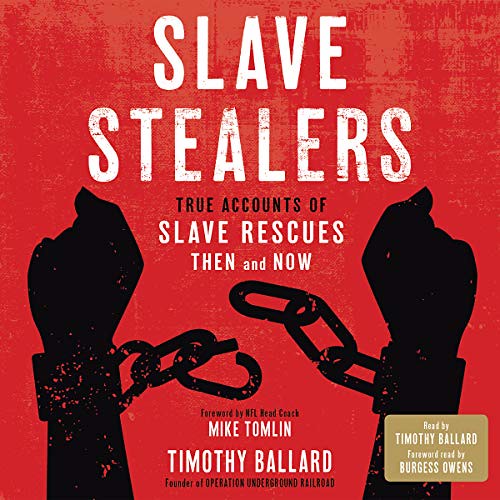 Slave Stealers: True Accounts of Slave Rescues Then and Now By Timothy Ballard

“Today, there are approximately twenty to thirty million people enslaved. Close to six million of these modern-day slave victims are children. Human trafficking brings in an estimated 150 billion dollars annually and is the fastest growing criminal enterprise on the planet.” These are the grim statistics that Timothy Ballard has worked to combat throughout his career, first as a special agent and now as CEO of Operation Underground Railroad (O.U.R), a nonprofit organization devoted to infiltrating child trafficking rings. Slave Stealers is, in part, the story of Ballard and O.U.R., which sprang from his promise to rescue a young Haitian boy from slavery. However, it is also the story of past abolitionists whose work Ballard strives to emulate, particularly Harriet Jacobs. Jacobs was a nineteenth-century slave who endured vicious treatment at the hands of her master before making a daring escape to freedom and dedicating her life to helping the enslaved. Her story is woven into the modern narrative, illustrating the parallels between historical and contemporary slavery – both involve people seeking to profit from the slave trade, and both involve intrepid workers who have dedicated their lives to fighting it.
I was inspired by multiple figures in Slave Stealers, including Ballard himself and the remarkable people he encounters and collaborates with in the missions described in the book. The story is interspersed with intriguing sidebars devoted to Fredrick Douglass, Harriet Beecher Stowe, and the Emancipation Proclamation, among other subjects. Chapters are devoted to the work of Harriet Tubman, Abraham Lincoln, and other abolitionists (past and present). I was particularly inspired by a section Ballard devotes to the contributions everyone can make to combat human trafficking. He writes, “Each of us has a unique skill set. Each of us should, like Lincoln, get creative in how we contribute to the solution. Some are great writers, like Harriet Beecher Stowe. Others are great speakers, like Fredrick Douglass. Some enjoy advocating for public policy, or fundraising, or putting on events. All of these things help.” It is this sense of immediacy that makes this book unique, the sense that a sadly timeless issue can be challenged by the application of timeless wisdom and activism.
4.5 stars.