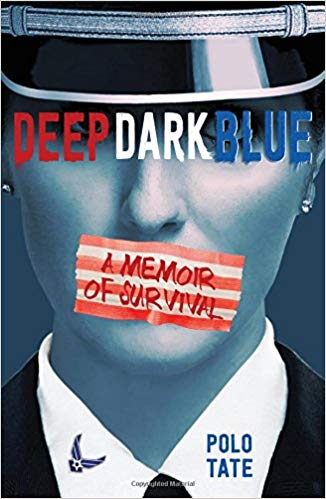 Deep Dark Blue: A Memoir of Survival By Polo Tate

Polo Tate arrived at the U.S. Air Force Academy with a mentality that fed off challenges. She was a highly successful student-athlete who quickly rose to the physical and mental demands of the academy. She was also no stranger to tragedy, having suffered great personal loss as a child. However, she had no way of foreseeing the pain and mistreatment she would undergo at the academy. Her story quickly devolves into a chilling narrative of grooming, abuse, lies, threats, and blatant sexism, all of which are depicted in vivid and unsparing detail. The grooming is described in progressively disturbing levels, from harmless favors to personal conversations to strange and sudden acts of deceit and violence, all of which finally culminate to outright abuse. This has lasting effects on Tate’s physical and mental health, although she eventually emerges with her innate decency and character intact.
This book was interesting as a study of grooming and as a depiction the emotional and physical effects of sexual abuse. (In one scene, Tate repeatedly punches a wall in order to dispel recurring mental flashbacks, eventually breaking bones in her hand.) It was inspiring to see how Tate found the courage to report an abuser despite receiving threats and enduring social exclusion. In terms of narrative power, I think the story might have been more suited to a journal article than a full-length book. However, I still recommend it as an examination of superiors abusing inferiors in a rigidly hierarchical environment. 3 stars.