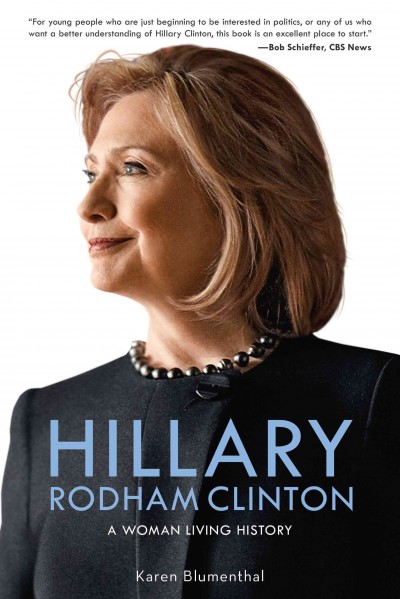 While Hillary Clinton is likely best known among young people for her most recent presidential campaign, her public life has spanned decades and is laid out for readers in Hillary Rodham Clinton: A Woman Living History. This biography follows Clinton’s life and career, from her birth through her 2016 campaign, describing her childhood, education, and years in politics and law.
Clinton was reared in Chicago, and later attended Wellesley College. She was Wellesley’s first student commencement speaker, earning a standing ovation after challenging the statements of a senator who preceded her at the speaker’s platform during the ceremony. She went on to attend Yale Law School, embark on a legal career, wed a future president, and serve as First Lady of Arkansas, First Lady of the U.S., Senator (Rep. NY), and U.S. Secretary of State. This biography explores Clinton’s private life as well, emphasizing her roles as wife and mother in a fascinating and challenging marriage.
I liked Blumenthal’s use of numerous quotes from Clinton herself and from a wide range of friends, family members, opponents, and supporters. My favorite features of this book were the glimpses into Clinton’s personality, the presentation of the less noticeable facets of her nature. Blumenthal writes of Clinton’s staff, as “They knew a different Hillary—a woman who always asked about their families and encouraged them to be home with their babies and sick children.”  Blumenthal also conveys the private frustrations faced by Clinton, writing, “Remind me’, she said to a staff member at one point, ‘have I ever done anything right in my life?’”
The book presents Clinton not only as an aggressive, if guarded, politician, but also as a fun friend and a devoted wife and mother. The reader learns about games Clinton and her husband played with their daughter, her mother-in-law’s early dismay over her lack of glamour, and, of course, her relationship with the brilliant and complicated Bill Clinton. Overall, I enjoyed this book, recommend it to anyone interested in Hillary Clinton, and award it 3 stars.

Find this book in our catalog: Hillary Rodham Clinton: A Woman Living History