Our March creative writing workshop was dedicated to blackout and found poetry.

Blackout poetry is the poetic form of taking an existing text and blacking out words and lines to leave a new poem… The act of redacting or recomposing the original text by presenting the remaining non-blackened text as a new work.  The poem is usually presented or read as is; the words that remain on the page as well as the blackouts are part of the poem.

Found poetry–at least as I’ve presented to the teens–are more often rearranged.  Found poetry is the process of taking existing texts–this can be anything from a page of a book, news article, or even a computer manual–and selecting phrases or words, then refashioning, slicing, and reordering the selected text to present a new poem.  According to poets.org, it is the “literary equivalent of a collage.”

The teen writers tried both of these forms as well as an altered form of blackout poetry using highlighters.  They also wrote in pairs.  Although every work is still an expression of the writer, this process felt less exposing since the original text was written by someone else.  For those that normally struggle with poetry–as many of the teens in the workshop have admitted–this exercise makes writing poems less intimidating.

Check out what they’ve come up with!

The typed text below, particularly the line breaks, was interpreted from what was presented to me.

Original text from Under the Never Sky 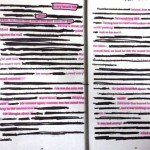 while, he could only cough and pace until the pain

leaving a streak of

her temper showed every

this was the only way

He inhaled again, curious, but her mind was deep in the unconscious

forcing him to crawl over broken cement and warped metal, pushing

luck in his world

around him, so loud he felt the sound thrum in his chest

He led his head fall again

chemicals that burned hotter than fire

but it was nothing compared to

It was bad enough

he’d killed at least one of them 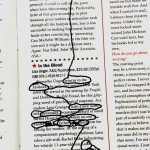 returns to the Hollows

with a new name

where no one knows

and threatens to expose her

two of them argue

Original text from The Fall of the House of Usher 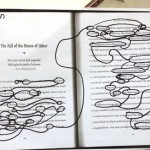 through a view of

the House with a gloom spirit

with insufferable feeling of

a sentiment mind scenes of

upon the mere house

upon a few rank bleak walls,

with an utter depression I can compare to

no goading of the imagination

I paused to think 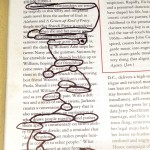 Two friendships and relationships are tested

when she and her young son

are caught in the crossfire of

The fact of unresolved love anguish

Draws people together and collectively

overshadowed by many flaws is 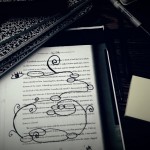 freed from its hideous

To view a listing of our upcoming programs, visit:  http://cityofpasadena.net/library/teens/events_and_programs/