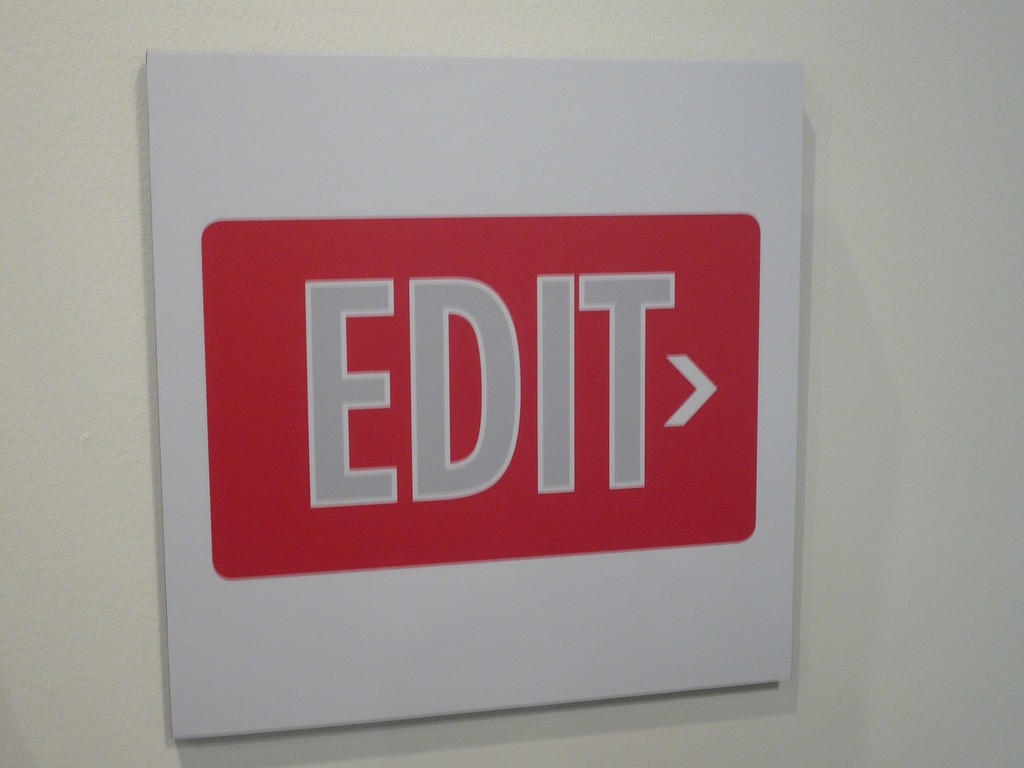 Ever wondered about those thousands of editors working around the world and around the clock on Wikipedia articles? Consider Hatnote, created to make meaningful, as well as pleasant, music from edits to Wikipedia. Bells indicate additions, strings plucked indicate subtractions; the deeper the tone, the larger the edit. If you watch the map on the site, you can see whether editors are people (green) or bots (purple), which articles are being edited, and where in the world the editors are doing their work.

With Wikipedia music in the ear and editors everywhere in mind, here are some suggested titles–all written by authors of many other fascinating nonfiction works–in honor of all those armchair experts.

Wikipedia: “Toothpick”
The Toothpick: Technology and Culture by Henry Petroski Like The Pencil, Henry Petroski’s The Toothpick is a celebration of a humble yet elegant device. As old as mankind and as universal as eating, this useful and ubiquitous tool finally gets its due in this wide-ranging and compulsively readable book. Here is the unexpected story of the simplest of implements–whether made of grass, gold, quill, or wood–a story of engineering and design, of culture and class, and a lesson in how to discover the extraordinary in the ordinary.

Petroski takes us back to ancient Rome, where the emperor Nero makes his entrance into a banquet hall with a silver toothpick in his mouth; and to a more recent time in Spain, where a young señorita uses the delicately pointed instrument to protect her virtue from someone trying to steal a kiss. He introduces us to Charles Forster, a nineteenth-century Bostonian and father of the American toothpick industry, who hires Harvard students to demand toothpicks in area restaurants–thereby making their availability in eating establishments as expected as condiments.

And Petroski takes us inside the surprisingly secretive toothpick-manufacturing industry, in which one small town’s factories can turn out 200 million wooden toothpicks a day using methods that, except for computer controls, haven’t changed much in almost 150 years. He also explores a treasure trove of the toothpick’s unintended uses and perils, from sandwiches to martinis and beyond.

With an engineer’s eye for detail and a poet’s flair for language, Petroski has earned his reputation as a writer who explains our world–from the tallest buildings to the lowliest toothpick–to us. 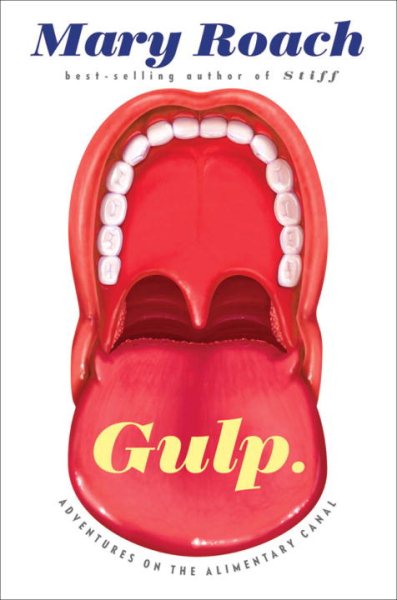 “America’s funniest science writer” (Washington Post) takes us down the hatch on an unforgettable tour. The alimentary canal is classic Mary Roach terrain: the questions explored in Gulp are as taboo, in their way, as the cadavers in Stiff and every bit as surreal as the universe of zero gravity explored in Packing for Mars. Why is crunchy food so appealing? Why is it so hard to find words for flavors and smells? Why doesn’t the stomach digest itself? How much can you eat before your stomach bursts? Can constipation kill you? Did it kill Elvis? In Gulp we meet scientists who tackle the questions no one else thinks of–or has the courage to ask. We go on location to a pet-food taste-test lab, a fecal transplant, and into a live stomach to observe the fate of a meal. With Roach at our side, we travel the world, meeting murderers and mad scientists, Eskimos and exorcists (who have occasionally administered holy water rectally), … Like all of Roach’s books, Gulp is as much about human beings as it is about human bodies.
The irresistible, ever-curious, and always best-selling Mary Roach returns with a new adventure to the invisible realm we carry around inside.

If you like your research unassailable but laugh-out-loud funny, Mary Roach is definitely the author for you!

Wikipedia: “Cod”
Cod: A Biography of the Fish that Changed the World by Mark Kurlansky

The codfish. Wars have been fought over it, revolutions have been spurred by it, national diets have been based on it, economies and livelihoods have depended on it, and the settlement of North America was driven by it. To the millions it has sustained, it has been a treasure more precious than gold. Indeed, the codfish has played a fascinating and crucial role in world history.

Cod spans a thousand years and four continents. From the Vikings, who pursued the codfish across the Atlantic, and the enigmatic Basques, who first commercialized it in medieval times, to Bartholomew Gosnold, who named Cape Cod in 1602, and Clarence Birdseye, who founded an industry on frozen cod in the 1930s, Mark Kurlansky introduces the explorers, merchants, writers, chefs, and of course the fishermen, whose lives have interwoven with this prolific fish. He chronicles the fifteenth-century politics of the Hanseatic League and the cod wars of the sixteenth and twentieth centuries. He embellishes his story with gastronomic detail, blending in recipes and lore from the Middle Ages to the present.And he brings to life the cod itself: its personality, habits, extended family, and ultimately the tragedy of how the most profitable fish in history is today faced with extinction. 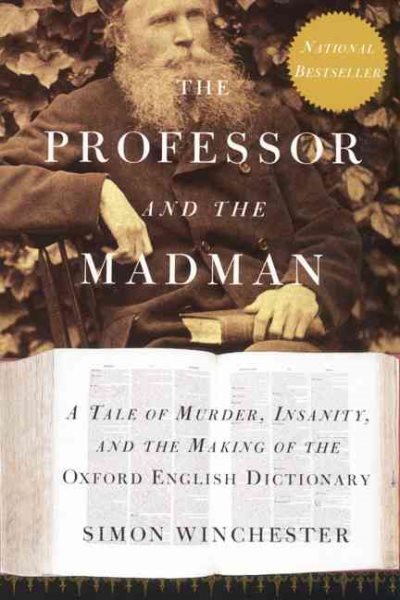 The Professor and the Madman, masterfully researched and eloquently written, is an extraordinary tale of madness, genius, and the incredible obsessions of two remarkable men that led to the making of the Oxford English Dictionary–and literary history. The compilation of the OED, begun in 1857, was one of the most ambitious projects ever undertaken. As definitions were collected, the overseeing committee, led by Professor James Murray, discovered that one man, Dr. W C. Minor, had submitted more than ten thousand. When the committee insisted on honoring him, a shocking truth came to light: Dr. Minor, an American Civil War veteran, was also an inmate at an asylum for the criminally insane.
The creation of the Oxford English Dictionary began in 1857, took seventy years to complete, drew from tens of thousands of brilliant minds, and organized the sprawling language into 414,825 precise definitions. But hidden within the rituals of its creation is a fascinating and mysterious story – a story of two remarkable men whose strange twenty-year relationship lies at the core of this historic undertaking.

Wikipedia: “Apple,”  “Tulip,” “Cannabis (drug),” and “Potato”
The Botany of Desire: A Plant’s Eye View of the World  by Michael Pollan

Focusing on the human relationship with plants, the author uses botany to explore four basic human desires–sweetness, beauty, intoxication, and control–through portraits of four plants that embody them: the apple, tulip, marijuana, and potato.

In 1637, one Dutchman paid as much for a single tulip bulb as the going price of a town house in Amsterdam. Three and a half centuries later, Amsterdam is once again the mecca for people who care passionately about one particular plant–though this time the obsessions revolve around the intoxicating effects of marijuana rather than the visual beauty of the tulip. How could flowers, of all things, become such objects of desire that they can drive men to financial ruin?

In The Botany of Desire, Michael Pollan argues that the answer lies at the heart of the intimately reciprocal relationship between people and plants. In telling the stories of four familiar plant species that are deeply woven into the fabric of our lives, Pollan illustrates how they evolved to satisfy humankinds’s most basic yearnings–and by doing so made themselves indispensable. For, just as we’ve benefited from these plants, the plants, in the grand co-evolutionary scheme that Pollan evokes so brilliantly, have done well by us. The sweetness of apples, for example, induced the early Americans to spread the species, giving the tree a whole new continent in which to blossom. So who is really domesticating whom?

Weaving fascinating anecdotes and accessible science into gorgeous prose, Pollan takes us on an absorbing journey that will change the way we think about our place in nature.

Wikipedia: “Periodic table” and “Chemical element”
The Disappearing Spoon: And Other True Tales of Madness, Love, and the History of the World from the Periodic Table of Elements by Sam Kean 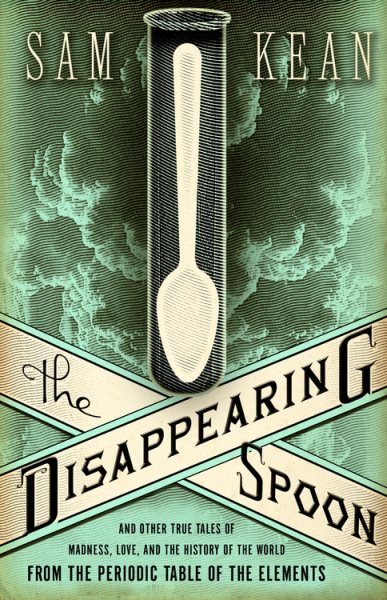 Why did Gandhi hate iodine (I, 53)? How did radium (Ra, 88) nearly ruin Marie Curie’s reputation? And why is gallium (Ga, 31) the go-to element for laboratory pranksters?*

The Periodic Table is a crowning scientific achievement, but it’s also a treasure trove of adventure, betrayal, and obsession. These fascinating tales follow every element on the table as they play out their parts in human history, and in the lives of the (frequently) mad scientists who discovered them. The Disappearing Spoon masterfully fuses science with the classic lore of invention, investigation, and discovery–from the Big Bang through the end of time.

*Though solid at room temperature, gallium is a moldable metal that melts at 84 degrees Fahrenheit. A classic science prank is to mold gallium spoons, serve them with tea, and watch guests recoil as their utensils disappear.