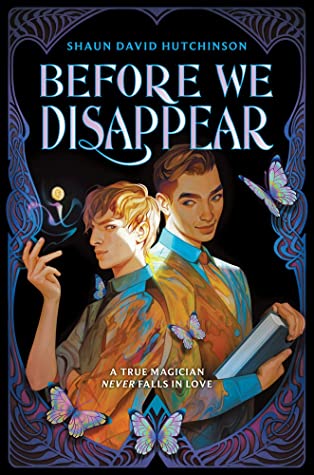 Before We Disappear by Shaun David Hutchinson

The fast-paced, crime-ridden life of Jack Nevin always kept the scrawny boy hopping from one place to the next with his equally as con-oriented keeper, the Enchantress, and his half sister Lucia. The trio tormented big cities with their illusions, which were usually stolen from talented magicians who couldn’t quite catch the spotlight. They went wherever the Enchantress saw her next bright opportunity, and after a scare in France, it happened to be Seattle’s Alaska-Yukon-Pacific World’s Fair Exposition in The United States. The easy gig that started as a way to make a large sum of money became the most life-altering experience of his life, as he encounters the secretive, mystical Wilhelm who apprentices the questionable, uprising magician Laszlo. As he unravels the twisted secrets behind this boy’s past and foreseeable future, Jack must find a way to save Wilhelm with the help of his new friends, as well as look deep within himself to find what he truly wants out of life.

Before We Disappear is a wonderful YA historical fantasy with an interesting plot and diverse, relatable characters. Hutchinson did an incredible job at illustrating the feel of a world’s fair through the view of rowdy teenagers during the 1900s, which allowed for a fun and immersive read. Because the span of the story wasn’t too long, only a few months, the pacing seemed to drag at some points, especially when the same events were covered through both Jack and Wilhelm’s POVs. While this style of writing is enjoyable to read, as it shows the differences and parallels between characters, it can sometimes get a bit confusing and slow. However, the plot is clearly well thought out and the novel serves as an enchanting read with great LGBTQ+ representation.