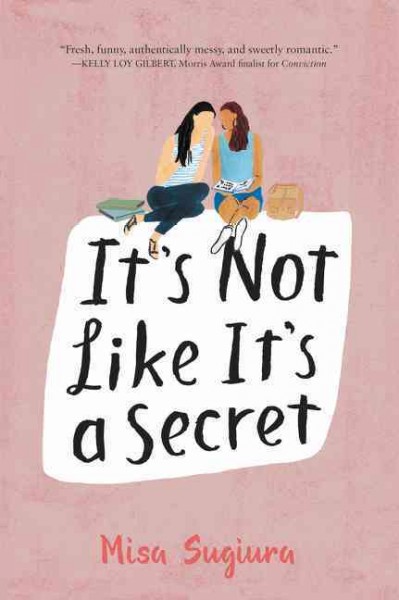 It’s Not Like It’s A Secret by Misa Sugiura

It’s Not Like It’s A Secret is not the coming-out story that you would expect from its cover. (Yes, even I judge books on their covers.) Sana Kiyohara is a sixteen-year old Japanese-American living in the Midwest who is in love with her best friend. And yet it’s when her family decides to move to California when everything gets complicated, namely because of a cute girl named Jamie and the possibility that her father is having an affair. Throughout the book, Sana struggles to balance the secrets she is keeping from herself and others, while uncovering the secrets others have kept from her.
It seems like this book would focus on Sana’s sexuality and her relationship with Jamie, but it’s not necessarily the reason I would pick this book up. I loved the queer women of color representation, but I didn’t love the fact their relationship moved really quickly, and there are later plotlines that didn’t sit well with me. Sana’s judgement was questionable, so I wasn’t rooting for them to get together. However, I found it adorable how much of a role poetry played in their relationship, and it was cool to be able to look up the poems as they were mentioned.
It’s not often that media portrays minorities, and so it was a surprise to find that in this book. Sana’s new high school, unlike her previous one in Wisconsin, has a diverse student body, but is separated into groups based on race. Though it’s refreshing for Sana to finally find people who understand her in the “Asian Girl” group, it’s clear that racism isn’t only in the Midwest, except instead of white people it’s her mom and her close friends, mainly against the Latino student group. This becomes a problem as Jamie is a part of this group, though as Sana learns, the Latino students equally discriminate against Asians. Although the everyday racism and stereotyping is uncomfortable, the author uses it to illustrate that minorities aren’t exempt from discriminating.
Overall, this book was entertaining, even though I definitely cringed at more than a few moments. I recommend this for people looking for diverse books, as the portrayal of racism between people of color is an important topic, but not necessarily for the romance, as it was a bit lacking for me. 3.5/5 stars.

Find this book in our catalog: It’s Not Like It’s a Secret