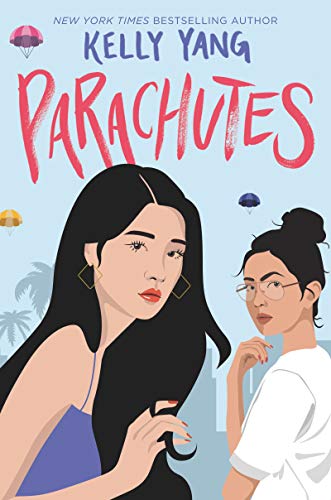 Every year, thousands of students from China migrate to the US to study in their schools. They are known as the “parachutes”. This includes our protagonist, Claire Wang. Claire’s parents didn’t believe that she would pass the gaokao, which is China’s version of the SAT. They decide to send her to study at American Prep so she could at least be “foreign-educated”. Without much of a choice, Claire leaves behind her friends, boyfriend, and lavish lifestyle to live with Dani De La Cruz and her mother.
Dani is a Filipino student who, thanks to her scholarship, studies at American Prep. Even though she is the star debater on the school team, she works part-time cleaning the houses to help out her mom. When she hears that her mom is renting out their extra room to a rich girl from Shanghai, she is very displeased. Little does she know that they will have a lot more in common than they both realize.
In the book, Dani thinks, “Tomorrow, she’ll get up and say a bunch of woke words she doesn’t believe, and everyone will clap and smile and feel good about themselves, while the world continues to spin in the sexist, racist, classist mess that it is.” I feel like this sentence perfectly captures the essence of this novel. Not only does Kelly Yang highlight the struggles of international students living in a different country, but she also speaks out about the problems Americans face in their everyday lives. Through these characters, Yang shows us that everyone is suffering in their own way.
I loved this book, however, with its heavy topics, it was tough to read at times. But I kept going because the story sucked me in. Plus, it made me reflect on myself and I identified with what Dani and Claire were going through. The ending also felt realistic and wasn’t a clear happy ending, but it wasn’t depressing. I would totally recommend this book. However, there are scenes of sexual harassment and rape, so I would warn the reader beforehand. Either way, anyone who has ever felt marginalized or silenced can enjoy and thoroughly appreciate this novel.
5 stars.