A review and opinion by William Krestow, age 16 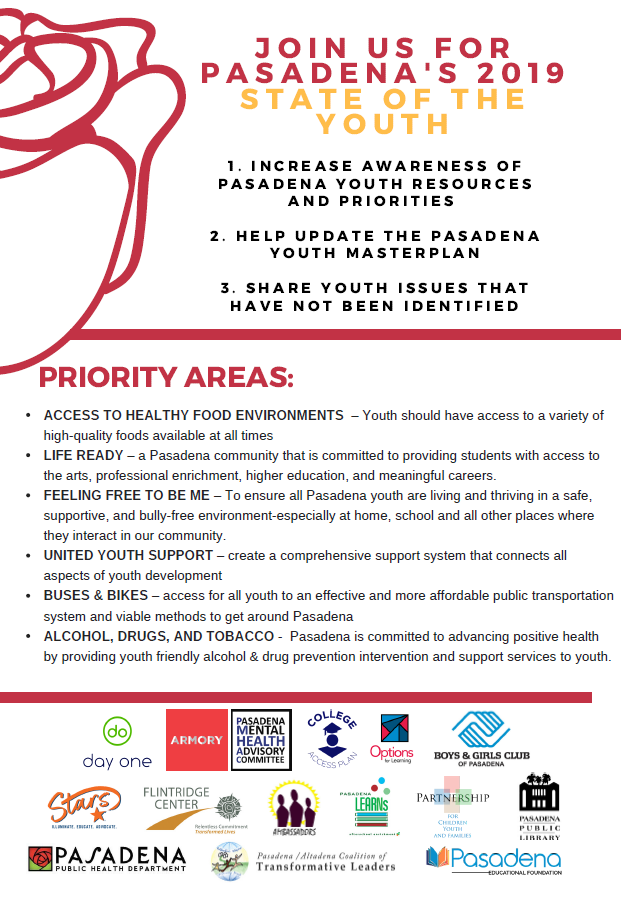 On February 6, 2019 in the John Muir High School Library, youth activists gathered for a meeting on annual accomplishments. With a single exception, it was a typical yearly progress meeting. There were few adults directly participating in the discussion; the purpose of the gathering is for adults to hear youth feedback. The 2019 State of the Youth was attended in majority by teens, with most participating as part of an organization (such as Teen Advisory Board, Day One, Youth Council, Youth Ambassadors,  and Youth MOVE). Split among six priority areas, the attendees discussed major issues facing youth in Pasadena, such as Life Readiness and Transportation. However, this event—while about youth, was not merely for youth; there was also attendance of police officers, program coordinators, and public officials such as the mayor.

Throughout the two-hour program, the discussion remained thoughtful, nuanced, and organized. While clear leaders of the gathering emerged, not one was an adult, and for the most part fueled the discussion admirably. Even those infrequently contributing had a veritable wealth of personal stories, anecdotes, and statistics at hand. Knowledge of the Pasadena’s municipal functions was prevalent everywhere, from the discussion of school health policies to the debate over the Metro tap card system, attendees had a working awareness of Pasadena’s practices. Yet there were also the inherent flaws present in all youth activism. The at-risk youth section of the homeless population was left unmentioned, harmful curriculum such as D.A.R.E. untouched on, and overall, Pasadena Unified School District (PUSD) schools were the overwhelming center of discussion.

That being said, the Life Readiness group presented excellent opinions on graduation, college, and life skills. The Drugs, Alcohol, and Tobacco group successfully dodged the base, hard-line anti-drug rhetoric in favor of a more nuanced conversation. United Youth Support group successfully engaged the younger members into a complex discussion of social and mental health. Access to Healthy Food Environments group admirably discussed school nutrition standards and cafeteria. The Feeling Free to Be Me group addressed the pressing problems of inflating social media usage as well as skyrocketing teen depression, anxiety, and stress rates. Most notably, the Transportation group integrated their ideas regarding schools within the larger context of Pasadena’s struggles with municipal services such as the metro and buses. All the while, these issues were being observed not only by the program’s adult coordinators, but also by public figures and police officers. As one police officer said, “We are very interested because we know you guys are where we’re going, and so if we can get closer to you and fill the gaps [in a youth’s support structure]. Especially on the law enforcement side, if we can fill the gaps now, then we don’t have to worry about doing it later.”

Agreeing with the importance of youth activism was Pasadena’s Mayor Terry Tornek who eloquently stated, “I think it is important for our youth to speak up and to get engaged. And the problem frankly, from the city’s point of view, is that there’s constant turnover and so its hard as kids grow up and move through the system, sometimes there’s not much continuity… But if you can take the longer view and realize that [the] people who come after you will benefit form that… I think these young people are learning some important lessons.”

To finish off the two-hour conference, youth members from each of the six groups presented on the conclusions of their group’s discussions. The presentations were excellent. Each presenter had a clear working knowledge of their topic, clearly had a personal involvement or attachment in it, and decent ideas. The presenter referenced current programs which they’d like to keep or alter, explored multifaceted viewpoints, and tailored their ideas specifically to those public officials in attendance. That being said, specific procedural ideas were uncommon, and precise figures were absent.

It was here that the public officials attending proved their mettle. Each one in attendance payed undivided attention to each of the presenters, with some taking notes on their subject matter. Many were present during and after the discussions to urge public input to municipal processes.

State of the Youth is organized by the Pasadena Youth Network and the Partnership for Children Youth and Families. Youth Network meets on the first Wednesday of the month at 4pm at Pasadena Central Library during the school year.