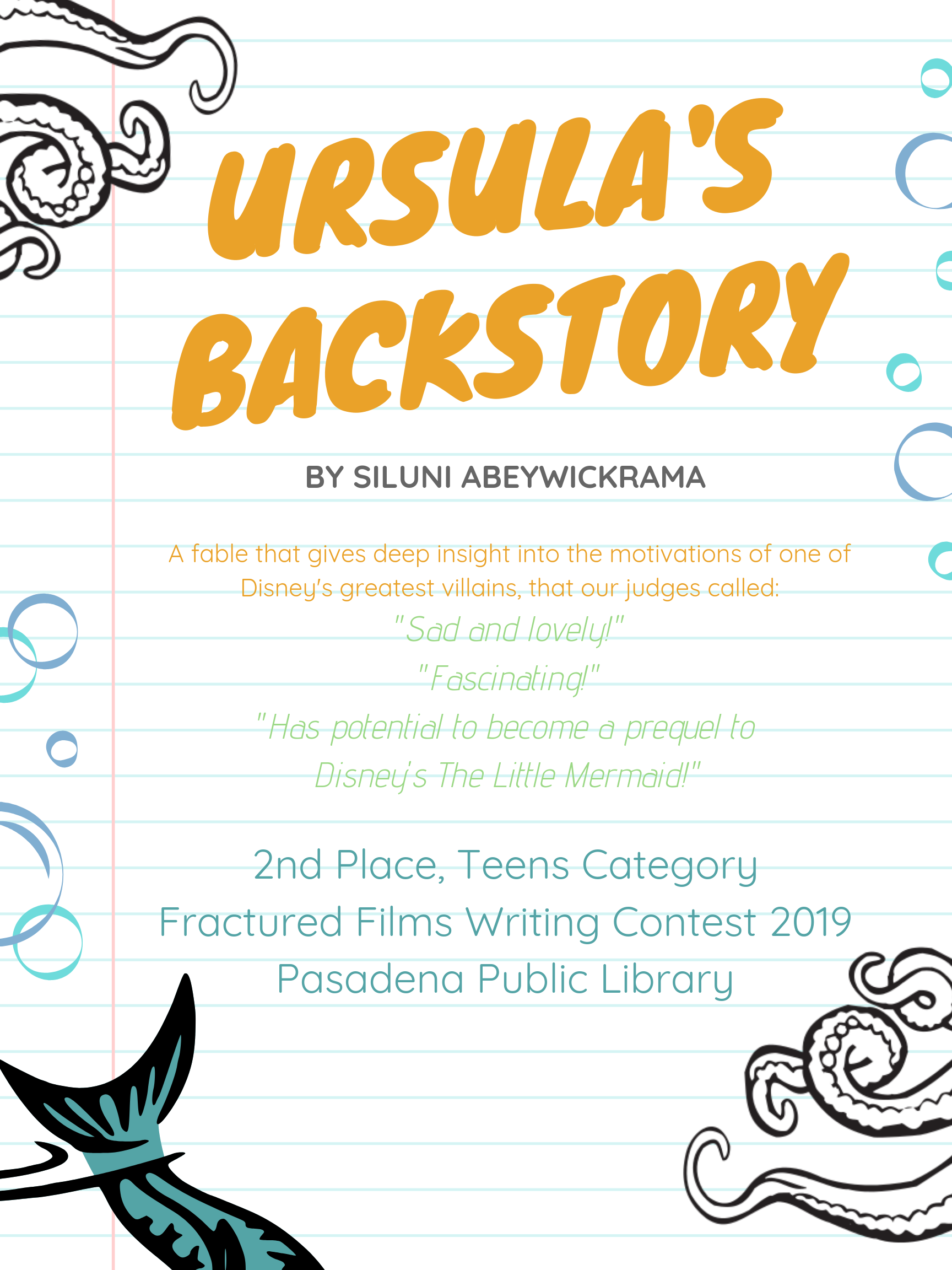 Ursula was beautiful. Her tail sparkling white, and her long wavy hair the deepest black. She was known not only for her beauty, but for her kindness. Every merman in Atlantica wanted to marry her, except the merman she wanted most, King Triton. At the time, Ursula worked for him.

One beautiful day, King Triton called Ursula in to have a chat.

“Your Majesty.” She bowed down.

“Ursula, Atlantica is incomplete without a queen. It’s time for me to get married.” King Triton took a deep breath and then smiled. Ursula could feel her heart pounding. This was her chance!

“Ursula, meet Athena.” A mermaid swam up from behind Ursula. She had long red hair, green eyes, and an aqua tail. She was beautiful. King Triton and Athena looked at one another in a way that made Ursula feel uncomfortable.

“It’s nice to meet you.” Athena shook Ursula’s hand. She had a sweet voice.

“We’re getting married, Ursula.” King Triton took Athena’s hand in his. Ursula felt her heart sink. She felt tears rushing up to her eyes.

“I have to go.” Ursula swam away, crying. She found a small corner and sat in it.

“I loved him.” She sat there for a while, sobbing. She wiped her tears. She didn’t want to be mad at him. Holding herself together, she headed back to Triton’s throne, where he was speaking to Athena.

“Is there something wrong, Ursula?” the king asked when he noticed her.

“Not at all. I just came to say congratulations to the two of you.” Without waiting for a reaction, she swam away, still sobbing.

Nobody paid any attention to Ursula anymore, the attention was now all on Queen Athena. It made Ursula mad when she saw how happy the royal family was.

One day, a wicked thought came to her mind. Why do I have to suffer, when she can. Everything was going great for her before Queen Athena showed up, so she figured getting rid of her would solve all of her problems. She wanted to kill Queen Athena. Using King Triton’s trident would make it easier for her, so she planned on borrowing it. Ursula no longer had the beautiful soul everyone loved her for. Jealousy had changed her.

It was time to set her plan into action. One day, Ursula went in to visit King Triton in his throne room.

“Ursula!” The king looked happy to see her.

“Your Majesty.” She bowed down. After a long conversation, Ursula left the throne room, with his trident in her hand. The king hadn’t seemed to notice. Instead, he swam to the surface, and Ursula secretly followed him.

There, she found the royal family, smiling and laughing together. She noticed King Triton giving the Queen a music box. She stayed hidden, with the trident still in her hand.

“Summon a ship in Queen Athena’s way.” The trident glowed. It took a while for something to happen. Ursula waited there impatiently. But then, she saw a big ship coming in. She smiled and swam back to the King’s Throne to return the trident.

The ship came in closer and closer. It was coming straight towards them.

“Look out!,” King Triton cried. He grabbed all of his daughters and swam down into the water.

“Athena! Come on!” He looked up at her. She gasped. She was about to head down when she noticed the music box still sitting on one of the rocks. The ship was inches away from her. She reached out to grab it, but then, it was too late.

“Athena! No!” The king was horrified.

King Triton swam rapidly into Ursula’s room not long after, tears running down his cheeks.

“It was you.” He swam away, and returned seconds later, with his trident in his hand.

“How could you!” His face turned red with anger. “Now you will pay.”

His trident began to glow. Ursula felt dizzy. She felt her head grow. Eight octopus looking arms sprouted all around her waist.

“What’s going on?” she screamed, and her shining white tail disappeared. Soon, she was purple.

Everything came to a stop.

She stared into King Triton’s eyes.

“Okay, if this is how you want to play.”