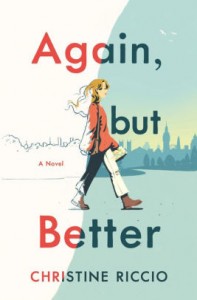 Again, but Better By Christine Riccio

Christine Riccio’s delightful debut, Again, but Better, introduces readers to the wonderful world of college– a world where Shane Primaveri has been totally killing it with her amazing grades, pre-med track, and happy parents. Right? Wrong. In fact, what she’s got isn’t even what she wants. So far during her time at college, Shane has made a grand total of zero friends. She barely ever goes out. And romance? That’s going to happen when pigs fly.
Shane decides that she needs a change– a big one. And what’s bigger than spending a semester in London? So, Shane flies off to start a whole new life– one filled with fun, boys, and adventure! But wiping the slate clean isn’t as easy as Shane thinks. Living outside of her comfort zone is unsettling, and when self-doubt starts to creep up on her, her carefully made new life begins to crumble. Not everything is hopeless, however. Not when she has fate and a little bit of magic on her side.
Again, but Better is a hilariously relatable package, complete with the romance fails, the carefully penned diary entries, and the sailor cup-slamming. And the mouthwatering food descriptions. This reviewer was left craving some good, hot shawarma. Mmm.
Typically, you’re not supposed to judge a book by its cover, but this cover art was so gorgeous that I couldn’t help but think that this book must be good because the cover was so pretty.
Though somewhat cliché, the storyline was clean, crisp, and clear. Each of the flat mates had their own moment to shine, and they were all beautifully fleshed out characters. Not a single one had empty holes in their personalities. The author has done a lovely job of giving each one an individual, unique personality, with character clichés nowhere in sight.
I’d give this book 4.5 stars.