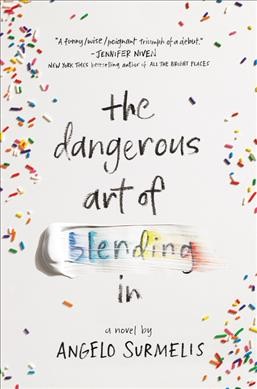 The Dangerous Art of Blending In by Angelo Surmelis

The Dangerous Art of Blending In by Angelo Surmelis is a somewhat true story of a teenager growing up, trying to blend in. Evan Panos is a Greek Christian, with a mother who is very strict and traditionalist. What she doesn’t know is that Evan is homosexual and struggling to come out to a close-minded church. He had an encounter with a kid at, ironically enough, Christian camp, and his best friend is openly gay—for Evan himself. As he struggles to find his own sexuality and where he stands in the world, while trying to survive his mother who beats him, Evan also deals with school and hiding his family life from his classmates.
The crux of this book is that the author who wrote it had a very similar childhood to the main character. It is really quite beautiful that he can still write about his previous experiences and find a way to help young gay people come out in hard environments. It is a bit graphic at times, but that is to be expected of a real story. Ultimately, this is a great read, and it really engaged me in its story. 3.5/5 stars.

Find this book in our catalog: The Dangerous Art of Blending In