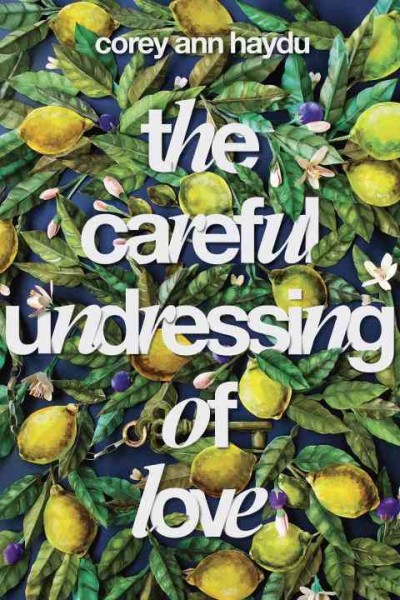 The Careful Undressing of Love by Corey Ann Haydu

The Devonairre Street girls of Brooklyn are said to be cursed. According to local legend and the ominous admonitions of elderly female Devonairre Street residents, any boy with which a Devonairre girl falls in love is doomed to die. But to Lorna Ryder and her close group of friends, the curse is merely a fable. That is, until Delilah’s boyfriend Jack is killed in a horrific car accident. Until a rumor that should have been no more than story unfolds into a prophecy. Until the future of a group of self-assured youths grows dark as the questions of adulthood, conformity, and love crash into them head-on.
Trite as the saying may be, The Careful Undressing of Love by Corey Ann Haydu is a reminder to never judge a book by its cover (or the name, for that matter.) Where I expected tired teen love story, I found a fascinating, magical-realism adventure that still elegantly addressed the essential components of a romance novel. When Jack is killed, the elderly Angelika Koza and several other of the adults of Devonairre Street start to impress rules and principles on the girls that, while they don’t explicitly validate the curse to their daughters and neighbors, certainly ostracize the young women and force them to question what makes them so different and dangerous compared to those living outside their community. As as result, there becomes a divide in a once inseparable group of friends—a divide between those who start to believe in the curse and conform to the persona that society imposes on them, and those who believe that they have the power to control their own fate and attempt to retain their identity even while their community tries to take it away. The result is a book that subtly yet masterfully emphasizes themes of conformity vs deviancy and community vs the individual—two powerful and wonderfully thought-provoking concepts that I did not expect a YA romance novel to tackle.
Haydu’s style shines from the opening paragraphs of the story. Her prose feels like poetry and the imagery she utilizes is diverse and vivid. She explores the magical realism subgenre, so although the book is set in New York City and the girls’ lives are not quite so different from those of normal girls living in Brooklyn, the presence of curses and magic did at times make me feel as though I was reading about gypsies from several centuries ago. Those themes, however, never feel too invasive as Haydu is careful to respect her own story (a practice that may seem obvious to any author but I believe can be lost on some who force many divergent plot lines into a story that simply cannot hold them). The only criticism that I have is that the main character, Lorna, was perhaps the least interesting character in a cast full of unique personalities. I believe a much better choice for the protagonist would have been Delilah, whose overwhelming grief and confusion would have served the role better. 4.5 stars.

Find this book in our catalog: The Careful Undressing of Love