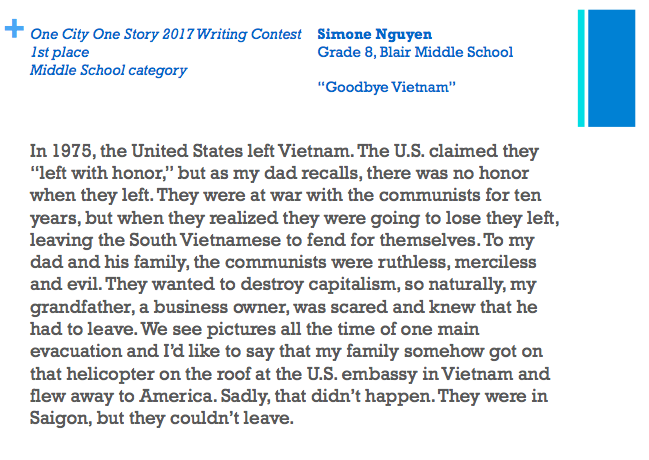 Summary:  The narrator recalls his or her family’s journey over the sea as they emigrate from Vietnam to Thailand.

In 1975, the United States left Vietnam. The U.S. claimed they “left with honor,” but as my dad recalls, there was no honor when they left. They were at war with the communists for ten years, but when they realized they were going to lose they left, leaving the South Vietnamese to fend for themselves. To my dad and his family, the communists were ruthless, merciless and evil. They wanted to destroy capitalism, so naturally, my grandfather, a business owner, was scared and knew that he had to leave. We see pictures all the time of one main evacuation and I’d like to say that my family somehow got on that helicopter on the roof at the U.S. embassy in Vietnam and flew away to America. Sadly, that didn’t happen. They were in Saigon, but they couldn’t leave.

For the adults, this was obviously stressful. For my dad, twelve years old at the time, this situation was fun. Cousins and other relatives that he’d never seen before were at his house, and they had nothing to do, so they all played together. It was an endless supply of friends that distracted my dad from worrying about the future.

Meanwhile, my grandparents tried to leave many times. One time, there was a huge boat, a freighter ship, which would take them to Australia. It was docked at a warehouse near a river in Saigon. The family went to the warehouse the day they were supposed to leave to wait to get on the ship. But they heard that North and South Vietnamese were back in negotiations, which might make it possible to stay in their home. When my father and grandfather went back to the warehouse later on just to check if they were loading, they saw that the ship had left. My grandfather said that he had seen a part of the ship floating in the river, but my dad thinks that he said this to comfort himself.

One night, a man came to their house and told my grandfather that my grandfather’s sister had made a successful journey to Thailand and had sent this man back to Vietnam to take my dad’s family to Thailand. They had a way out. My grandfather ushered all the kids, six in total, to go upstairs. They laid out the plan. In the morning, they were to head down to the bus station. Then they would take a bus to a little village south of Saigon where they would get on the boat. They could not walk together for that would arouse suspicion. They couldn’t let anyone know that they were leaving.

Very early the next morning, they got ready and locked the door. I wonder if they looked back. Walking with one child hand in hand, my grandma carried one tote bag. One bag for their trip. The children walked in pairs about one hundred yard behind each other. They took the bus to this village they called the West, where they stayed at a motel for the day because the boat they were taking leaves at night. In the evening, they all went to the port, but my grandfather went ahead. He got on the shrimp boat that would connect to the boat that would take them to Thailand. The children saw him in this boat, heading along down the river and cried, “Hi dad! Hi!” while waving their arms. My grandfather looked straight ahead in fear that other people would find out that they were trying to escape.

The seven of them were alone on the shrimp boat. It was small, about the size of the closet. The shrimp boat took them to a holding boat, where they would then wait for the boat to Thailand. Finally, the boat arrived. It was small and it didn’t look like it should be on the ocean. Nevertheless, my family piled in it. There were about fifty people in the boat, all crowded in the engine room. That’s it. People could go outside or stay in the engine room. My dad remembers seeing this light, this glow, of Vietnam on the shore. As they went further and further into the open ocean, the light receded. On the first night, there was a storm. Violent waves and icy winds forced the boat to stop at an island to wait out the storm. The conditions inside the boat were terrible. People got seasick and they threw up inside the engine room, which soon began to smell of vomit. One of my aunts couldn’t stand to be inside the boat any longer, so she went outside. I picture her holding onto the side of the boat, hair whipping around her face. At least she got some fresh air. They persisted. Another night, another storm. For this one there wasn’t an island for them to stop at. At one point, you would see the sky, a second later, you would see the bottom of the ocean. In the daytime, it didn’t seem like they were moving because they had no reference point. “Boat, sea, sun, horizon. That’s it,” as my dad put it. The trip took four days.

On the fourth day, they saw the glow again. It was the refugee camp in Thailand. My dad remembers that it looked very civilized. People streamed out from who knows where looking for relatives on the boat. The boat docked on the side of the river next to a park where everybody lived, surrounded by barricades the police had put up. My dad’s family set up homes for themselves made up of bamboo, and they slept on mats on the sand.
Those mats on the beach were the first home the family had outside of Vietnam, but it led to me writing about his journey in Pasadena. Even though I have never been to Vietnam, I carry this journey with me.