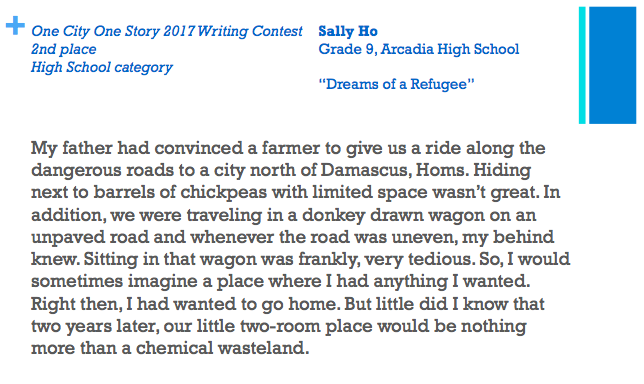 “Dreams of a Refugee”

Summary:  A family flees their hometown after the destruction during the Syrian Civil War.

Whenever I look up into the night sky, I’m staring into a thousand twinkling lights and realizing that each one represents a person with light inside, even if it’s dark and cold on the outside. The sun was still sleeping as my oldest sister nudged me awake. In a few hours, the sun would pierce through the cold darkness and bring its warmth and light into our world. Compared to the other members of my family, I moved lethargically and with hesitation. I was then told to gather my things and be ready to leave. “How long will we be gone?” I pondered. So, I grabbed my lucky charm on a table beside where we slept. My sister then took my arm and the next thing I remember, is that we all ran. My father had convinced a farmer to give us a ride along the dangerous roads to a city north of Damascus, Homs. Hiding next to barrels of chickpeas with limited space wasn’t great. In addition, we were traveling in a donkey drawn wagon on an unpaved road and whenever the road was uneven, my behind knew. Sitting in that wagon was frankly, very tedious. So, I would sometimes imagine a place where I had anything I wanted. Right then, I had wanted to go home. But little did I know that two years later, our little two-room place would be nothing more than a chemical wasteland.

It was the early hours of my twelfth birthday when gravity pulled large canisters of metal filled with chemical gases towards the ground of my home village. Luckily, I wasn’t at home when it happened. After word of “demonstrations” in March of 2011 spread, my parents and older siblings fled Jobar, which now lay in ruins on the outskirts of Damascus. The number of deaths ranged from about 250 to 1,720 people after the Ghouta chemical attack. My parents had saved up in anticipation of the current issues getting out of hand. It turns out that the Syrian Civil War was caused by a group of rebels who were protesting against the current leader, Bashar al-Assad. Then, the government got violent and outside parties each took a side. This caused the problem to turn into absolute chaos. So, as an innocent civilian, I was just trying to escape the war.

My feet had fallen asleep after sitting in that wagon for a day. We were now in Homs and about to make a four-day walk to Aleppo. However, after a few hours of walking, my feet were blistered and my sandals were worn out and ripped. But nonetheless, I had to continue walking. During the day we rested and at dusk, night, and dawn we walked quickly and silently. After reaching Aleppo, we were ready to cross the Syrian border to a city in Turkey, Kilis. Soldiers marched back and forth walls of barbed wire and brick. There was tents set up with people waiting inside them. At the time, I didn’t understand what they were waiting for. But now know that it would never come unless they were willing to sacrifice some lives.

My father had found an underground tunnel that would let us escape, but we had to wait for a distraction. One week later, our miracle came. I had felt it at the tip of my nose when it came. Syria rarely gets rain and when it did, it really rained. As soon as the guards started to retreat to their tents, we ran to the tunnel. Although my feet were blistered, burned, and bloody, I ran as quickly as I could because there was nothing more that I had wanted than to get out of that situation. After two more hours of walking, the clouds had begun to clear up. I looked up into the sky to find a rainbow that pointed me into the direction I needed to go and sure enough, I could see Kilis in the distance. Coincidentally, we had just enough money for a taxi to take all of us to Gaizentep because it wasn’t safe to be so close to the border.

After a year in Gaizentep, we had made enough money to send my father and oldest brother to America where they would find better jobs to sponsor the rest of our family. Another year had passed and we now had enough money to send all of us to New York. I had packed my things without hesitation and was ready to go to the Gaizentep airport. Fifteen hours after a long, enduring flight, we had landed in America. I didn’t know any English and so their words sounded like a symphony of flies buzzing through my head. “Haalima,” I had heard someone call my name. I turned around, saw my brother standing next to my father, and embraced them in a hug as tears accumulated around my eyes.

When people ask me what my name means and where I’m from, I tell them my story. A little over two years ago, when people asked me to tell them my story, I would’ve told them the story of a little girl who missed her home. Today, that little girl isn’t a little girl anymore because she had to grow up way quicker than she should have. She knows that home isn’t a place. Home is a feeling of safety and love that you get when you’re around those you love. She found that out when she discovered her hometown of Jobar was destroyed and she would never forget the people she knew or who she was. Haalima’s name means ‘dreamer’ in Arabic. I will be remembered as Haalima, the girl who carried on the memories and dreams of her hometown and delivered the stories of each of the people from Jobar to the world. I rubbed my fingers over the imprints in my favorite charm and relived those memories of home, the journey, and the present one last time.