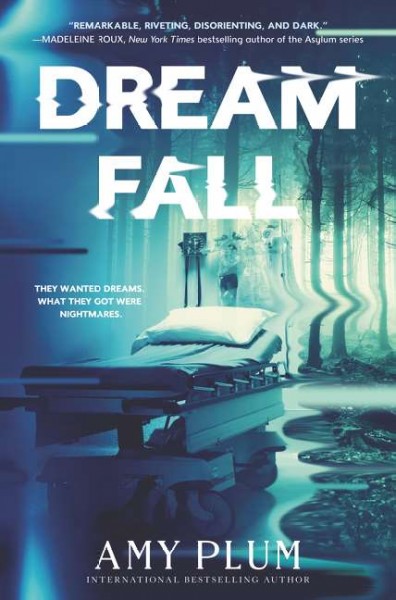 Summary: Cata Cordova suffers from such debilitating insomnia that she agreed to take part in an experimental new procedure. She thought things couldn’t get any worse…but she was terribly wrong.
Soon after the experiment begins, there’s a malfunction with the lab equipment, and Cata and six other teen patients are plunged into a shared dreamworld with no memory of how they got there. Even worse, they come to the chilling realization that they are trapped in a place where their worst nightmares have come to life. Hunted by creatures from their darkest imaginations and tormented by secrets they’d rather keep buried, Cata and the others will be forced to band together to face their biggest fears. And if they can’t find a way to defeat their dreams, they will never wake up. -Goodreads

Dreamfall is a book that melds science, fiction, and psychology. It starts off with seven teens undergoing a test to cure their insomnia. However, all goes horribly wrong when the machine they are hooked up to while sleeping malfunctions and plunges them into a series of nightmares. All the while, an outsider is observing the test and reading each casefile about the subjects. One of the seven is killed while in a nightmare, and is dead after waking up and screaming. The researchers desperately fight against time, while the now six-person, strong group works together to fight their monsters. Each nightmare and the downtime between help them learn more about each other and themselves.
This book and the characters were genuinely unique and interesting. I found the science aspect interesting and the plot helped to create a tension around the fight against time. The characters were believable, had their own issues, and all were realistic teens. They had to overcome their differences to succeed in running away and battling the nightmares. The group made me want to root for them, to hope they succeed. They were likable characters, despite their issues. The book was a realistic, solid read and was an entertaining work. 3.5/5 stars.

Find this book in our catalog: Dreamfall