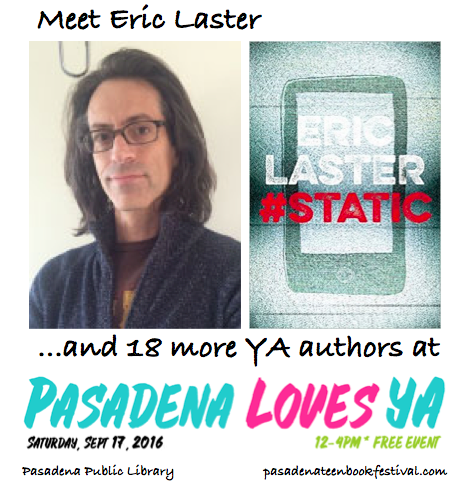 Static puts a twist on death.

Instead of seeing dead people, Curtis Brooks talks to them, or at least just his brother. After his brother, Wilt, dies in a suspicious car accident, Curt starts receiving calls from the afterlife. Contacting him from a Walmart of dead things (e.g. black and white televisions, pet rocks, chariots), Wilt plots a rebellion while Curt hunts for his brother’s killer.

The characters of Static can be frustrating. It sometimes felt like characters were being written as stereotypes because they didn’t seem that realistic. With the exception of Curt (and somewhat Wilt), you never form a bond with any of them. Curt is the only character that you get to know. You are told to like or dislike characters, but you are never really shown why. But, while readers might not be able to empathize with Curt’s situation, they will certainly become attached to him. Although he can be frustrating at times, his devotion to his brother and his determination are endearing. There are certain aspects of his story that I felt could have been explored more (e.g. his relationship with his father, how medicine and therapy has affected his life, what his relationship with Wilt was like before, etc.), but, for the most part, Curt is somebody that the reader will root for.

The plot of Static was intriguing. The progression of the novel can seem slow at times because a lot of time is spent building up the suspense. Some of the situations that Curt finds himself in are pretty odd, but they only add to the overall feeling of absurdity (in a good way). While the big reveal at the end of the novel was not a surprise, it was well done. Although it was a somewhat predictable “plot twist,” it was believable. The novel is plotted out in such a way that it keeps you on your toes as it slowly leads you to the truth. Overall, Static is an alluring read that offers an interesting take on death. I give it 3.5/5 stars.

For our September, YA Book Club, we discussed Static by Eric Laster. Most of Book Club were pretty excited about it (after reading its blurb), but were somewhat disappointed once we read it. Many felt that more could have been done with the Aftermart, since most of the blurb focused on it and since it just seemed really interesting (a Walmart of dead things?). We felt that the Aftermart was more interesting than Curtis’s investigation, despite it only having a minor role. Curtis, the protagonist, also wasn’t our favorite character, but YA Book Club liked all of the characters (except the villain(s)). Many wished to know more about Wilt and Curtis’s relationship before Wilt’s death. At times, Static didn’t seem realistic. While that’s normal for novels with ghosts, the way that Curtis went about his investigation could have been more cautious (although it was pretty entertaining). YA Book Club agreed that Static was an interesting book that kept readers engaged, but felt its ending was somewhat anticlimactic. YA Book Club gave Static an average of 3.2/5 stars.

How did you come up with this idea of an Aftermart?

When I started writing Static, I only knew that Curtis, the main character, was receiving
calls from his dead brother Wilt; I had no idea where Wilt was. Still, I kept writing. I
reached the point in the story when Wilt tells Curtis where he’s calling from, and a
question popped into my head. What if consumer products—items discontinued for
whatever reason—“dead” products, obsolete or ill-conceived—had an afterlife as it is
believed that people do? Where might such items go? I wondered. From there, it was
(for me) a logical progression to the idea of an ever-expanding superstore filled with
obsolete items and entertainments from yesteryear, where Wilt and all deceased persons
spent eternity browsing and shopping.

What inspired you to write Static?

Being an older brother.

I was visiting a certain city one time, on vacation, and had asked three friends for
suggestions of places to eat the next morning. The friends were siblings, all of them in
their 30s. At every suggestion made by the younger two, the eldest sibling scoffed, called
the suggestions no good, and acted as if her brothers couldn’t have been dumber. I
thought the behavior was ugly, but I recognized it. I sometimes acted that way toward
my younger brother, dismissing what he said or did as if it were lame/stupid simply
because he was younger and had different ideas than I. Watching the eldest sibling that
day on my vacation, I determined to never again act as she did. We’ll have to ask my
brother if I’ve succeeded (I feel pretty confident), but in Static I wanted to chart the
transition that I consciously brought about in myself as an older brother. Like Wilt at
the beginning of the book, I used to be unthinkingly dismissive of my younger brother;
like Wilt at the end of the book, I now treat my younger brother with love and respect,
appreciating him on his terms. Thankfully, unlike Wilt, I’m not dead.

Would you have gone about this entire situation like Curtis did?

Excellent question. I’d like to think that I could be as resourceful and as persistent as
Curtis given similar circumstances, but I’m not convinced that I would be. For me,
Curtis’s courage is most evident in his agreeing to take over his brother’s secret job, a
decision that he believes might get him killed. I’ve never been very good at courting
danger, probably would have spied on the house where the character of Titus Yang lives,
and nothing more. If I got so far as to discover that my brother was, in fact, murdered,
I’d then trust the police to pursue the killer.

Who was your favorite character to write besides Curt?

Wilt. Even though he’s not “onscreen” as much as some of the other characters, he’s
always a presence with Curtis, and it was important to me to dramatize his transition—
evolution—from typical name-calling big brother to one who appreciates Curtis as a full-fledged human with talents and thoughts that might differ from his but are no less valid
because of it.

Looking back, is there anything that you would change about Static?

I don’t tend to re-read something once it’s published, because I know that I’ll inevitably
want to make changes—anything from fine-tuning dialogue to improving the flow of a
scene to rearranging entire paragraphs or chapters. So I’ll answer your question by
saying that, at the time I finished revising Static, it represented what I could do with the
characters and themes and overall story at the time. I’m proud of it. But if I were to
revise it now, as if it hadn’t yet been published, I would look for opportunities to go
emotionally deeper into the characters while keeping the general tone and humor of the
book the same.

Find this book in our catalog: Static