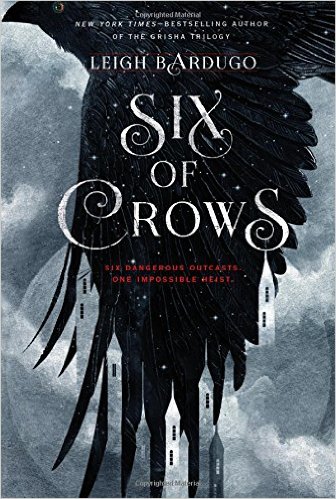 Ketterdam: a bustling hub of international trade where anything can be had for the right price–and no one knows that better than criminal prodigy Kaz Brekker. Kaz is offered a chance at a deadly heist that could make him rich beyond his wildest dreams. But he can’t pull it off alone…

A convict with a thirst for revenge.

A sharpshooter who can’t walk away from a wager.

A runaway with a privileged past.

A spy known as the Wraith.

A Heartrender using her magic to survive the slums.

A thief with a gift for unlikely escapes.

Six dangerous outcasts. One impossible heist. Kaz’s crew is the only thing that might stand between the world and destruction—if they don’t kill each other first. — Provided by publisher

For November YA Book Club, we read Six of Crows by Leigh Bardugo.

We talked a lot about the dynamic of the characters, their narratives, and the world of Six of Crows. We agreed that the progression of Nina and Matthias’s relationship was believable and exciting and that their backstory made their current situation/feelings much more realistic. While we generally liked Nina and Matthias, we were less enthusiastic about Bardugo’s “pair the spares” style. While Wyland and Jesper had a great dynamic, it seemed forced to some, used only as a way to make sure everyone was in a relationship. Overall, the group liked Kaz’s narration the most. Not only were his chapters an interesting look into his plots and schemes, but his backstory and history gave him character a lot of depth and made him much more relatable, understandable, and likable.  As for the setting, many were a little confused by the world of Six of Crows, but we just rolled with it. At times it may have been a little bizarre, but not to a point where it was unbelievable. We liked the Grishaverse because it was dark, but it wasn’t dismal.

While we all agreed that all of the characters should be dead (some aspects of the novel were too convenient), YA Book Club liked Six of Crows, giving it an average of 4.25/5 stars.

This meeting was moderated by Kara Eng, grade 11, from the Teen Advisory Board.